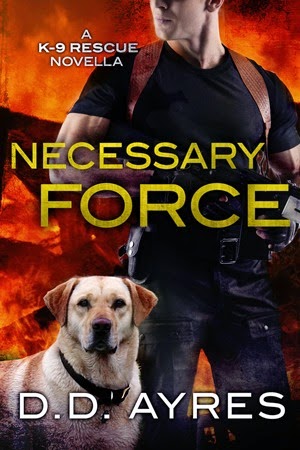 It was supposed to be a sexy calendar shoot to raise money for K-9 service dogs. Photographer Georgie Flynn never expected to break all her personal rules and jump into bed with one of the hunky men posing. And after their steamy night together, she certainly never expected to see him again…despite their powerful connection.

When she's targeted by a stalker and possible bomber, Georgie finds that her gorgeous one-night stand is the only one who can help.

Brad Lawson, an FBI operative, and his K-9 bomb sniffing partner are assigned to protect the pretty photographer--and this time, he’s determined to keep things professional. He just didn't count on their explosive connection rekindling. But with a deadly threat on the horizon, will he be able to keep his body’s demands in check and complete his mission?

Review:
Necessary Force is a prequel novella that introduces readers to D.D. Ayres' new K-9 Rescue series. As a fan of romantic suspense and an animal lover of course this series immediately caught my attention & I couldn't resist requesting a review copy on Netgalley.

Photographer Georgie first meets Brad when he is one of the models posing for the photos she is taking for a charity calender. After an incredibly hot one night stand she never expected to see him again and it isn't until several months later when their paths cross. Unfortunately they only meet again because Georgie is being targeted by a stalker and when they do meet she realises that everything he told her before was a lie. Now he's supposed to be protecting her but Georgie isn't sure whether she can trust him.

I think the main reason I didn't love this novella as much as I expected to was because of the lies that Brad had told when he first met Georgie. I didn't really think he had a plausible excuse for those lies and that made it hard for me to forgive him. Obviously in a novella the romance has to move fairly quickly but because I wasn't impressed with the way Brad had behaved I found it harder to accept that Georgie forgave him so quickly and was willing to jump into bed with him. I just think that if they'd had a simple one night stand with no awkward drama then I would have found it easier to believe that they could fall in love later down the line when they met again. That would have meant the story could have had a stronger focus on the suspense side of the story rather than the awkwardness between the two of them. The suspense side was a little on the lacking side because it was pretty obvious for a long time who the stalker was.

It isn't all bad though and there are a lot of things I liked about the story. The writing is good, the sex scenes were hot and I did like both of the characters (if I ignored Brad's lies!). I think the problems with the lack of suspense and the rushed feeling romance will probably be significantly reduced in the next book which is a full length novel so will allow the author to expand on the elements that were missing slightly here. In spite of the problems Necessary Force is a quick and enjoyable read and it has definitely caught my interest enough to make me want to pick up Irresistible Force.