Review: Melt for Him - Lauren Blakely 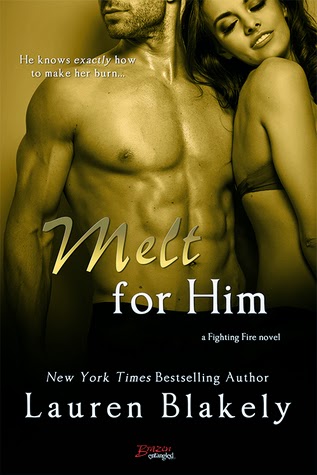 Fire captain and bar owner Becker Thomas usually spends his nights alone, trying to escape painful memories from his past. When he meets a sexy, free-spirited brunette outside his bar, he knows he’s found the perfect way to forget for one night. But when he later discovers the woman he’s itching for another night with is his best friend’s sister, everything comes to a halt.

Just out of a toxic relationship, Megan Jansen is only in Hidden Oaks to visit her brother, photograph the firemen’s calendar, and then slip off to another adventure. The brooding man who gave her the best sex ever is an unexpected surprise. The problem is, he’s her brother’s friend and a fellow fireman, and Megan’s rule is no firemen. She knows she’s going to get burned . . . but keeping their hands off each other is easier said than done.

Fighting Fire Series:
Burn for Me
Melt for Him
Consumed by You

Review:
Megan is just passing through Hidden Oaks, visiting her brother and taking photos for the local firemen's charity calendar before starting her new job as a tattoo artist in Portland. She's just escaped from one horrible relationship so the last thing she is looking for is a new one but that doesn't mean she's averse to having a little fun along the way - especially with the incredibly hot owner of the local bar. Becker isn't just a bar owner though, he also happens to be captain of the fire station where Megan will be taking photos and he's also her brother's best friend. It was supposed to be a one night stand but as they are forced to spend time working alongside each other the chemistry between them just keeps building and they're both finding it hard to resist. But can Megan put aside her fears over dating someone in such a dangerous line of work and will Becker be willing to break the man code to put the moves on his best friend's little sister?

I enjoyed the first book in this series (Burn for Me) but I knew immediately that I was going to love Becker so I was happy to find out that his story was up next. I have to say Lauren Blakely has really raised the stakes here and I loved Melt for Him so much more. The connection between Megan and Becker is incredibly intense and so hot it's combustible, I loved the fact that they were both willing to talk about their feelings and that even though they both had doubts for various reasons they were able to work things out like adults. There are plenty of steamy moments between them and this is definitely one HOT read.

I will say that I felt that the declarations of love came a little too quickly, Megan is only in town for two weeks and they both start talking about a permanent relationship before she is even due to leave so that side of things did feel a little rushed. I completely believed that they were well suited to each other though, I loved their chemistry and the way they teased each other and spent time verbally sparring. It wasn't hard to imagine that they could have a successful relationship but I would have found it a little more realistic if they hadn't moved quite so fast. The epilogue helped out a little there but do be prepared for a fast moving relationship when you pick this up. If you're willing to look past that you're going to get a sexy and enjoyable story that is well worth reading.