Review: Burn Bright - Patricia Briggs (or why I'm breaking up with the Mercy Thompson world) 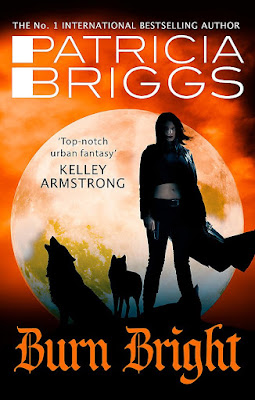 They are the wild and the broken. The werewolves too damaged to live safely among their own kind. For their own good, they have been exiled to the outskirts of Aspen Creek, Montana. Close enough to the Marrok’s pack to have its support; far enough away to not cause any harm.

With their Alpha out of the country, Charles and Anna are on call when an SOS comes in from the fae mate of one such wildling. Heading into the mountainous wilderness, they interrupt the abduction of the wolf–but can’t stop blood from being shed. Now Charles and Anna must use their skills–his as enforcer, hers as peacemaker–to track down the attackers, reopening a painful chapter in the past that springs from the darkest magic of the witchborn…

Review:
I've put off writing this review for weeks because every time I think about this book I get mad all over again. I honestly don't think I've ever been so disappointed in the direction an author has decided to take  a story and while I totally get that it is Patricia Briggs' right to do whatever she chooses with her characters and her world I don't have to continue investing my time and money in her series. I suppose I should probably point out that before Burn Bright I would have considered myself a Mercy Thompson / Alpha & Omega superfan. I reread all of the books and short stories in the MT world at least once a year with a friend and we have spent countless hours sending each other favourite quotes and discussing everything about these characters and this world. The reason I'm so upset and the reason I feel so betrayed by the author is because I feel like I know this series inside out and there was nothing, absolutely not one single hint to make revelations in this book seem even slightly plausible, let alone palatable.

I can't really talk about my biggest issue with this book without giving spoilers so continue reading this review at your own risk, but since I'm reviewing this so long after the release date I expect most fans have either already read this book or at least seen others mention the controversy. The absolutely 100% series ending revelation for me is that Bran has always had romantic feelings for Mercy. This is the man who has raised her since she was eight months old, the man who is the only consistent father figure she's ever really had, the man she turns to for advice and the one she looks up to beyond all others. This is the same man who watched over her while she slept as she recovered from a sexual assault, the man who gave her away at her wedding and made Adam promise to protect her, the man who has ALWAYS, in all circumstances treated her like a daughter.

And now we have Anna and Charles having a casual conversation about how Bran is "funny" about Mercy and Anna even saying she would hate Mercy as much as Leah does if Charles felt the same way about her that Bran does. Anna, who was herself a victim of rape and the worst kinds of treatments at the hands of her previous alpha is now blaming Mercy, who was a CHILD when this was all happening!  I'm sorry but in no circumstances is Mercy to blame no matter what Bran does or doesn't feel for her, Mercy has never led Bran on, she's never had an affair with him or tried to lure him away from Leah and even if she had that doesn't excuse Leah from child abuse. Because lets face it the way Leah treated Mercy, the way Bran has flat out stated in previous books that he couldn't adopt Mercy himself because Leah would have killed her, the way Leah attacked Mercy many times when she was a child and how the entire pack used to go out of their way to keep the two of them apart because they knew what would happen if they didn't. That's all because Leah is an abuser who would have happily KILLED A CHILD because she felt that child was competition for her mate.

I get that Patricia Briggs has written herself into a corner, she's said many times and shown in many ways that Bran is bonded to Leah and I think she's left herself with no option of ending their relationship. That's a bit of a problem when fans have been screaming for years that Leah is an awful, awful character and begging to see Bran get a happily ever after with literally anyone else. Now, in my opinion, a skilled writer would have been able to turn around Bran and Leah's relationship. I've seen other authors do that in the past and I so badly want to see Bran happy that I probably would have forgiven Leah far quicker than she deserved. But I won't forgive Leah because Bran has been turned into someone that I can no longer respect or even like. That just makes me hate both of them, it makes me look at every single interaction between Bran and Mercy throughout the entire fifteen book series and feel physically sick because I can no longer see the loving father figure that has always wanted what is best for Mercy. Now all I can see is the sick pedophile who has been grooming her.

This book contradicts itself in so many different ways when it comes to Leah. First it tries to make us feel sorry for her because her mate is in love with a child. Then Charles talks about how abusive she was to him when they first met too, how horrifically she treated him when he was also just a child who was just desperate for someone to love him, he specifically states that he would have adored her if she'd only been nice to him. So it wasn't just Mercy Leah abused then, this conversation also confirms that it was Charles too. So she's jealous of anyone that Bran gives love to and that shows what a petty and nasty person she is. To be honest you only have to look at the way she treated Anna the first time they met to see Leah's true colours! But then the book backtracks again and tries to show how nice she is because she saves Charles' life, I could have cheered for her at that point but only if we hadn't just been reminded about how awful she's been in the past.

If Patricia Briggs hadn't turned Bran into a pedophile but had instead just had Leah saving Charles in this book I would have stared to warm to her. If she'd then had both Bran and Leah make some big changes over the next few books (because lets face it he's never treated her well really so neither of them are perfect and they're both to blame for their issues!) then I think in time I would have softened to them as a couple and might have been able to want to see them happy together. It could have been so easy, especially since we get a better idea of the fact that Bran does actually love her in this book. Unfortunately for me it's too little too late and the way Bran's character has been totally and utterly destroyed has ended any love I ever had for this series.

The first time I read Burn Bright I was horrified by that conversation but I still had faith in PB and I was convinced that Anna and Charles had misread things and it was all going to be a horrible misunderstanding. I was positive that in the next book this would all be fixed with a few well placed revelations and that I could continue loving this world. I even went back and immediately reread the previous fourteen books specifically looking for signs that Bran felt anything but fatherly towards Mercy. I read fourteen books LOOKING for that and couldn't find a single thing that made me suspect it was true. Not one single word. Everything points to a father daughter relationship, every single interaction between them. Every single conversation with Samuel, Adam, any other character they always refer to Bran as Mercy's father. I actually managed to convince myself I'd read Burn Bright wrong and stressed myself over nothing.

Then unfortunately Patricia Briggs made public comments about it confirming my worst fears were true, Bran does have romantic feelings for the child he raised. Oh, we're supposed to see him as noble because he didn't act on them, and we're supposed to ignore it because apparently Mercy will never know how he feels. But that doesn't sit well with me, especially when she's made it clear that everyone else knows this but Mercy, so not only is Bran lying to her but so is her husband Adam, so is her childhood love Samuel, so is her brother Charles and her sister-in-law Anna and so is the entire Aspen Creek Pack - people she grew up with and was raised by. That breaks my heart for Mercy and it makes me so angry with everyone else that I can't see straight.

So that's the story of how Patricia Briggs destroyed the Mercy Thompson world for me, the series that I have loved for many, many years. The series that has been a huge comfort to me over the years. The series that I'm honestly not sure I'll ever be able to look at in the same way again. I hope that one day, in a few years time, I'll be able to forget that Burn Bright ever existed. And if I ever reach that point then perhaps I'll be able to reread the first 14 books again and remember how much I loved them but I will not be buying any new books in this world, and honestly I'm still more than a little heartbroken about that.

I should also probably link to my friend Ange's review because she goes into even more depth about the major issue I had and several other consistency problems with the story. She also includes quotes both from the book and from Patricia Briggs that further detail things I've mentioned above.