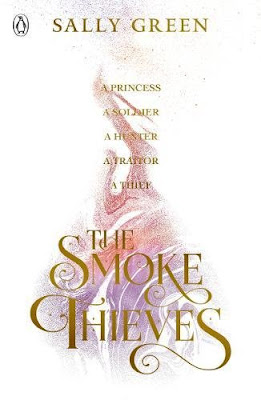 A princess, a traitor, a soldier, a hunter and a thief. Five teenagers with the fate of the world in their hands. Five nations destined for conflict.

In Brigant, Princess Catherine prepares for a political marriage arranged by her brutal and ambitious father, while her true love, Ambrose, faces the executioner's block.

In Calidor, downtrodden servant March seeks revenge on the prince who betrayed his people. In Pitoria, feckless Edyon steals cheap baubles for cheaper thrills as he drifts from town to town.

And in the barren northern territories, thirteen-year-old Tash is running for her life as she plays bait for the gruff demon hunter Gravell.

As alliances shift and shatter, and old certainties are overturned, our five heroes find their past lives transformed and their futures inextricably linked by the unpredictable tides of magic and war.

Who will rise and who will fall? And who will claim the ultimate prize?

Review:
The Smoke Thieves is the first book in what I think will be a brilliant fantasy series from Sally Green. The story introduces us to five main characters, all from very different backgrounds and each with an important role to play. Sometimes when you have so many different points of view it can be hard to keep track of all the main players but I never had that problem here, it helps that several characters are on the same journeys but by the end of the book all of the storylines have converged and I think the rest of the series is going to be even more fast paced.

Catherine is a princess who is currently getting ready for her marriage to the prince of a neighbouring country. The marriage has been arranged by her ruthless brother and father but she wants to make the best of things and is determined to win over the people of Pitoria. Ambrose is a member of the Royal Guard and one of Catherine's bodyguards but after the execution of his sister his family is now being targeted by the royals he has sworn to protect. He is trying to find out what secrets his sister could have discovered that led to her death but he also wants to protect Catherine and his family.

Tash is a young girl who is apprenticed to the demon hunter Gravell, she helps him trap and kill demons so they can collect the smoke that is released upon their deaths. It is highly illegal to hunt demons but the smoke is valuable and they can earn a good living selling it on the black market. March is one of the few remaining survivors of his people, he was rescued by a king but his people were slaughtered when they were caught between two warring countries and he has sworn to get revenge on the king he believes should have protected them. Then finally you have Edyon, a reckless young man who wastes his life stealing from others just for the thrill of it. Edyon believes he has no future but when he finds out the truth about his father a whole world of possibility opens up in front of him.

Each of these characters has their own journey to take and I enjoyed the character development we saw. The multiple POVs gave us a wide view of this world and the various conflicts between different countries and how it had affected the people living there which I really enjoyed. This is an expansive world so the story feels a little slow in the beginning because we're being introduced to lots of different characters and places but I was never bored and I devoured the story really quickly. Certain things like the use of demon smoke only really starts to get clarified towards the end of the story as lots of little hints and clues are put together and we realise what the big plan was all along and I can't wait for the next book to see where that leads.

Other Reviews:
Vee @ Under the Mountain
If you have reviewed this book on your blog please leave a link to your review in the comments & I'll add the link here.