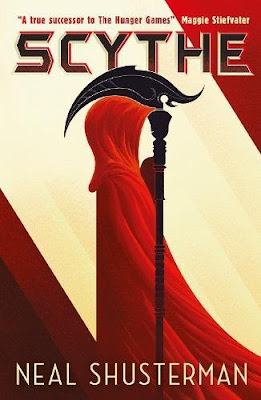 In a perfect world, what is there left to fear? A chilling and thought-provoking sci-fi novel from New York Times bestselling author Neal Shusterman.

A dark, gripping and witty thriller in which the only thing humanity has control over is death.

In a world where disease, war and crime have been eliminated, the only way to die is to be randomly killed ("gleaned") by professional scythes. Citra and Rowan are teenagers who have been selected to be scythes' apprentices, and despite wanting nothing to do with the vocation, they must learn the art of killing and understand the necessity of what they do.

Only one of them will be chosen as a scythe's apprentice and as Citra and Rowan come up against a terrifyingly corrupt Scythedom, it becomes clear that the winning apprentice's first task will be to glean the loser.

Arc of a Scythe Series:
Scythe
Thunderhead
The Toll

Review:
Scythe is set in a futuristic world where disease is a thing of the past and life is so good that crime and war are non existent. People are able to reset the ageing process whenever they like so you can live into your 90s and then go back and start your 20s all over again, even having a whole new family if you choose to. Not even accidental death is an issue as in nearly every instance hospitals can fix any damage and bring you back to life, in fact some teenagers take great joy in finding ever increasingly strange ways to hurt themselves just to prove they're invincible. The only blight on the world is the potential for an uncontrollable population explosion that would reduce the quality of life for everyone.

To avoid that the society has created the Scythedom, a group of people known as Scythes who are tasked with permanently ending the lives of a certain quota of people each year. Scythes are supposed to be beyond reproach, they have the power to choose who lives and who dies but they have to use it responsibly and they must be able to justify their choices. They have to kill people from across all walks of society, of all races, genders, ages and there must be no bias in their choices. But what happens if the Scythedom becomes corrupt? What happens if instead of being a neutral organisation carrying out a distasteful job to the best of their ability they end up with some Scythes who relish killing and take enjoyment from making people suffer?

This is the story of Citra and Rowan, two teenagers chosen to become Scythe apprentices, it isn't a job either of them would have chosen but that's why Scythe Faraday thinks they're perfect candidates. I really don't want to say too much about what happens to them but I can almost guarantee it won't be what you're expecting. This story is dark and it'll have you asking yourself all kinds of questions about what it means to be human and how an organisation that has the best intentions can possibly end up so barbaric. This isn't a simple YA romance in a futuristic setting (there's actually very little in the way of romance) - its so much more than that. This is about the journey that Citra and Rowan must both take in learning to become killers, not just physically learning to kill but trying to come to terms with that on an emotional and moral level. How do you take lives but still retain your humanity afterwards? How do you look into the eyes of grieving family members knowing you caused their pain?

I was absolutely hooked by this book from page one and I couldn't read it fast enough. The story is so full of unexpected twists and turns that you'll never be able to guess what is going to happen next and I loved the way Neal Shusterman kept me on my toes. The world building was brilliant, the politics was fascinating and more than anything I found the two main characters incredibly easy to relate to. Neither of them took joy in their apprenticeships but they do take their responsibilities seriously and when things turn against them they're up against the clock trying to save their own lives as well as the lives of the people they care about. I can't wait to start reading the sequel Thunderhead and Scythe was definitely one of the best books I've read this year by far.