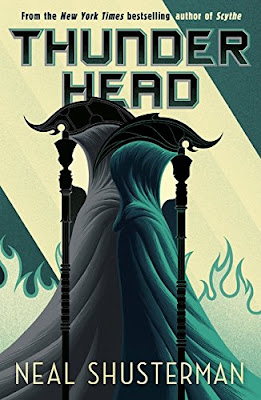 The dark and thrilling sequel to Scythe, the New York Times sci-fi bestseller.

The stakes are high in this chilling sci-fi thriller, in which professional scythes control who dies. Everything else is out of human control, managed by the Thunderhead. It's a perfect system – until it isn't.

It’s been a year since Rowan went off-grid. Hunted by the Scythedom, he has become an urban legend, a vigilante snuffing out corrupt scythes in a trial by fire. Citra, meanwhile, is forging her path as Scythe Anastasia, gleaning with compassion. However, conflict within the Scythedom is growing by the day, and when Citra’s life is threatened, it becomes clear that there is a truly terrifying plot afoot.

The Thunderhead observes everything, and it does not like what it sees. Will it intervene?

Or will it simply watch as this perfect world begins to unravel?

Arc of a Scythe Series:
Scythe
Thunderhead
The Toll

Review:
I absolutely loved Scythe so Thunderhead was a book I had incredibly high expectations for and Neal Shusterman didn't let me down. I'm really enjoying the direction this series is heading in, even if it's one that I never would have guessed at, and Thunderhead just left me even more desperate to get my hands on the final book, The Toll, next year. To be honest I don't know how I'm going to survive the wait after that shocker of an ending!

This book picks up Citra and Rowan's stories about a year on from the end of Scythe. Citra, now known as Scythe Anastasia, has started to settle into her role and has come up with her own code of honour when it comes to the people she gleans. Not all of the Scythes are happy with the way she does things and the Scythedom as a whole seems to be fracturing into two very different factions who have very different outlooks on the way things should be run. Meanwhile Rowan is still on the run and trying to stay off the grid but rather than holing up somewhere he's taking a more proactive approach and has turned himself into someone feared by all Scythes, especially the ones who perhaps take a little more pleasure from their job than they really should. Rowan spends his time hunting Scythes who he believes are abusing their powers and delivering the ultimate punishment.

We're also introduced to a new character called Greyson who has nothing to do with the Scythedom but has a very interesting role to play in the story none the less and through him we get a lot more insight into the Thunderhead, the omnipotent artificial intelligence that pretty much runs the whole world. I'm not going to give you any more hints about the plot than that so you'll just have to read the book for yourself but if you enjoyed Scythe then I guarantee you'll love Thunderhead. This world is so incredibly well thought out and the series raises so many interesting questions about life, death and morality. The characters are compelling and you can't help but feel invested in the journeys they are taking and what can I even say about that ending? You're a cruel man Neal Shusterman, a cruel, cruel man to leave us hanging like that! But I loved every minute of it so I'm not sure what that says about me LOL. This series has been one of my favourite new discoveries of 2018 and I have every expectation that The Toll is going to be phenomenal.