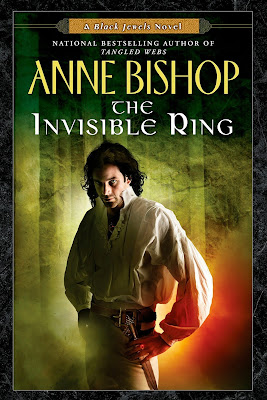 New York Times bestselling author Anne Bishop returns to the world of her Black Jewels Trilogy with a prequel that follows a man who is determined to rebel against the course set before him...

Jared is a Red-Jeweled Warlord bound as a pleasure slave by the Ring of Obedience. After suffering nine years of torment as a slave, he murdered his owner and escaped—only to be caught and sold into slavery once again.

Purchased by a notorious queen, Jared fears he will share the mysterious fate of her other slaves—never to be seen again—and so prepares himself for death. But the Gray Lady may not be what she seems and Jared soon faces a difficult decision: his freedom, or his honor...

Review:
I have to admit I was a little disappointed when I realised that The Invisible Ring is actually a prequel to the first 3 books in the Black Jewels series and is about a whole new set of characters that I don't remember being mentioned previously. I was excited to be back in this world but I love Jaenelle, Daemon, Lucivar and Saetan so much and was sad we weren't getting to spend more time with them. Having said that I still found myself really enjoying this story and we do get a few glimpses of Daemon that show how he was always trying to defy Dorothea in any way he could long before Jaenelle came along!

This story introduces us to Jared, a Red-Jewelled Warlord who has been kept as a pleasure slave thanks to the Ring of Obedience. He's already escaped once only to be recaptured and sold back into slavery so he is extremely unhappy to find himself being purchased by a Queen who is known to kill her slaves. The Gray Lady may have purchased Jared but it quickly becomes clear that not everything about her is what it first seems. Perhaps if Jared can look beyond the surface he'll find a Queen he is actually willing to bond himself to but with Dorothea trying to capture the Gray Lady and her entire party they have to find a way to work together if they want to survive.

This story wasn't quite as dark as the previous three, yes it's still a world where rape and torture is considered normal in certain circles (you can thank Dorothea and her like for that one!) but there are people who still respect the old ways and know that women and men have an equally important role to play in a happy and productive society. Just because some people have twisted the system doesn't mean everyone is like that but it can be very hard to know who can be trusted. I actually really enjoyed the chance to see what a real Queen should be like, one who will protect her people at any cost to herself and who wouldn't dream of hurting the people who depend on her. Jaenelle is the same but she started out as a damaged child and had to learn the old ways after being horrendously abused so it was a little different for her.

While this wasn't my favourite book in the series so far I'm glad I read it and I'm now excited to see what else Anne Bishop has in store for us and this world that she's created.