Review: Down Among the Sticks and Bones - Seanan McGuire 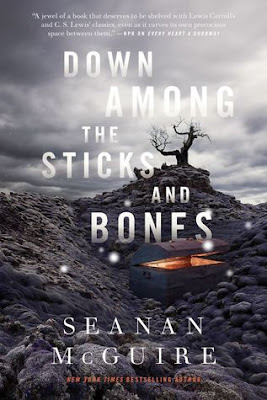 Twin sisters Jack and Jill were seventeen when they found their way home and were packed off to Eleanor West’s Home for Wayward Children.

This is the story of what happened first…

Jillian was her father’s perfect daughter—adventurous, thrill-seeking, and a bit of a tom-boy. He really would have preferred a son, but you work with what you've got.

They were five when they learned that grown-ups can’t be trusted.

They were twelve when they walked down the impossible staircase and discovered that the pretense of love can never be enough to prepare you a life filled with magic in a land filled with mad scientists and death and choices.

The Wayward Children Series:
Every Heart a Doorway
Down Among the Sticks and Bones
Beneath the Sugar Sky
In an Absent Dream
Come Tumbling Down

Review:
We already met Jack and Jill in Every Heart a Doorway but this is the story of their lives growing up and their journey through a doorway and into the Moors. Technically that makes it a prequel to the first book but trust me you're far better off following the official reading order because you'll enjoy this so much more knowing how Jack and Jill's story ends.

The twins really have the worst parents, cold and totally standoffish they only had children because they thought it was expected of them but they never really understood or cared for the twins as anything other than mini accessories to be paraded around when it was convenient and left behind when they weren't needed. So it's no wonder that the two girls were a little messed up by their childhood but it was sad to see that they had been pitted against each other so often that they didn't have a very strong bond between them. In fact most of their relationship was build on rivalry and jealousy directly caused by their parents and neither of them quite seemed to know how to bridge the gap between them.

When they arrive on the Moors they both totally rebel against everything they've been brought up to do, Jack goes from being her mother's little princess to someone who loves to learn and is happy to get her hands dirty while Jill does the opposite and wants the fun of wearing pretty dresses after years of being treated like a son by her father. I actually loved the way Seanan McGuire subtly shows the ridiculousness of gender stereotypes and how damaging they can be, how girls are often raised to be pretty and quiet ornaments while boys are supposed to be messy and loud. That attitude is damaging all round but it's not something that is challenged enough in my opinion. There are also nods to both the stories of Dracula and Frankenstein in the dark and kind of creepy world of the Moors.

I loved Jack in the first book and I think I ended up liking her even more in this book, we really get to see exactly how much she sacrificed for her sister and it's sad to think how Jill repaid that in the first book. I was really pleased with the ending but I had one major question that I was desperate to get an answer to. What happened to the innkeeper's daughter? I'm going to choose to believe that she got the HEA she deserves since it wasn't spelled out one way or the other.

I really hope we get to explore all of the different worlds visited by the children in Eleanor West's Home for Wayward Children, there is just so much potential for all the different places this series could take us and I can't wait to visit them all!