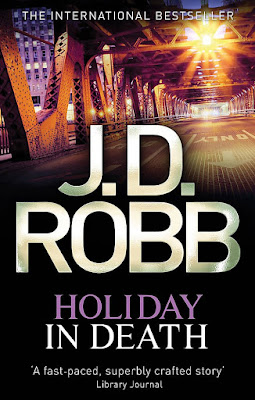 She smelled it, fresh death. Both metallic and fruity. Easing the door all the way open, she found it . . .

It's Christmas-time in New York City, but homicide lieutenant Eve Dallas struggles to get into the holiday spirit. Finding a woman strangled to death by a murderous Santa doesn't help. And he's left behind a present: a partridge in a pear tree, pinned to the victim's hair.

With a creeping dread, Eve watches the bodies mount and realises the key - the killer is counting down the twelve days to Christmas. And there is only one connection. The victims had been using the same dating service.

Eve enters a dark world where searching for The One is fraught with terror, leaving her racing to find the murderer, as things get much too close to home.

Review:
With the holidays fast approaching and Eve still not fully recovered from previous injuries you might think she'd be taking things easy work-wise but murderers never rest and the latest serial killer she's chasing seems to have a goal they want to achieve by Christmas. Dressing as Santa to gain access to the victims and leaving behind trinkets linked to the Twelve Days of Christmas song it looks like they're going to have bodies piling up very quickly if Eve doesn't manage to figure things out fast enough.

As always with this series the murders were gruesome, the suspense kept me guessing and the story was fast paced and easy to read. As much as I enjoy the mystery element my favourite parts are definitely the ongoing relationship development between Eve and Roarke, they're coming up on their first ever Christmas together and Roarke is determined to start some new holiday traditions and give them both the Christmas that they never had as children.

Eve on the other hand is panicking about having so many important people in her life to buy gifts for, as if choosing presents for her friends wasn't hard enough she has to try and come up with something for Roarke, the man who literally already owns everything anyone could possibly want! I really loved the way she sneaked her shopping in around catching a serial killer, she would be interviewing potential witnesses one second and then being gifts the next in perfect Eve efficiency.

Add in the banter between Peabody and McNab and there was plenty of humour to give relief from all the death and destruction. Sparks are already flowing between those two and no matter how much Peabody claims to hate him I have a feeling that things will really start to heat up in the not too distant future!

It's going to take me a while to catch up with the books in this series but I'm still quite excited that I have so much more to look forward to.