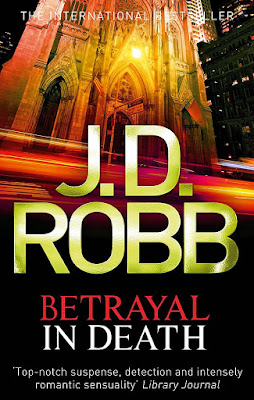 He was a virtuoso of murder, a performer par excellence. He was, always, the star of the show...

Homicide lieutenant Eve Dallas hates hosting parties. Trapped in a plunging dress and her old anxieties, she is way out of her comfort zone. But then a maid is found in an upstairs room - brutally murdered. Eve snaps into action.

Sly Yost is refined, cultured and an elite assassin. A killer with startling connections to police politics, he is viciously confident. And Eve has upset him.

Faced with the added complication of a suspicious arrival much closer to home - an Irishman in a petal-green suit - Eve must face the terrifying possibility that the real target may in fact be her dazzling billionaire husband, Roarke.

Review:
There is an assassin in New York and he's currently targeting people who work for Roarke. The FBI know his name, they've linked him to over 40 homicides but even though they've been hunting him for years they've never even come close to catching him. But now he's made his first big mistake, he's going after someone that Eve Dallas cares about and she won't stop until she's brought him down, especially when she thinks her husband might be one of his targets!

I know this is a huge series and I'm not even halfway through it yet but I still find it really impressive that J.D. Robb has managed to keep this series so fresh and interesting twelve books in. Eve and Roarke's relationship is always evolving, they both had pretty messed up childhoods so neither of them has much experience when it comes to seeing healthy relationships. It means they both make mistakes and mess up occasionally but no matter what happens between them their love is just getting stronger and they have an unbreakable bond. I love that even when they have a blow up once they calm down they discuss things and try to understand each other's points of view.

Betrayal in Death was interesting because we got to see an old face from Roarke's past, an old friend from his childhood is in town and looking to reconnect and he has plenty of stories to share. I enjoyed seeing a different side to Roarke through him and it was fun to see Mick's shock at finding Roarke married to a cop. The murders start hitting a little too close to home for Eve and that makes her all the more determined to find the killer and put him behind bars but this guy is smart and he's slippery so she's going to have to work fast if she wants to outwit him, especially with the FBI hovering on her tail trying to steal her bust. She's also dealing with her broken hearted aide Peabody who is currently fighting with McNab, something Eve is extremely irritated about. Another fab book in the series that left me wanting more so I'm off to start the next one!