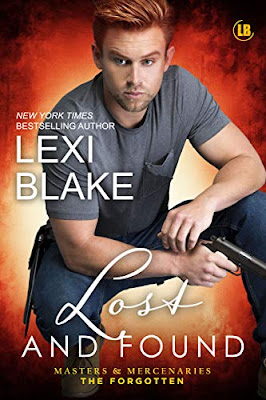 Owen Shaw and his “brothers” lost everything, their entire existence erased. Science had robbed he and all the Lost Boys of their memories and their past, but not their future. Hunted by every intelligence agency in the world, they are focused on two goals: find a cure for what was done to them and ensure that the technology that ruined their lives doesn’t get out into the world. Rebecca Walsh might be the key to achieving both. Owen has been studying her closely, living in her building, and he cannot resolve how such a beautiful, giving woman could have helped design the evil process that destroyed his past.

Dr. Rebecca Walsh has dedicated her life to researching the secrets of the mind. Her atmospheric rise in her field was fueled by the horror of watching her mother’s agonizing journey into madness at the hands of a disease with no cure. She vowed to never rest until she finds it. But obsession takes a heavy toll, and when Owen moves into her building she realizes how much of her life she has missed out on. Owen opens her eyes to a whole new world, filled with joy, laughter, and possibly love.

Owen and Rebecca grow closer, unraveling more about each other and the mysteries surrounding her connection to Hope McDonald. As the sinister forces working against the Lost Boys descend on Toronto, secrets long buried are uncovered that could shatter the bonds holding the Lost Boys together and cost Rebecca her life.

Review:
Lost and Found is the second book in Lexi Blake's spin off from the Masters and Mercenaries series about the lost boys who were rescued by Taggart and McKay. These men lost everything when they had their memories wiped by a sadistic scientist and they're still trying to find out information about their pasts and exactly what happened to them. Owen may have no memory of it but he knows that he betrayed the rest of his team when trying to save his mother and sister from the scientist who held them all captive. He's been trying to make amends ever since but he worries that his brothers will never forgive him for the mistakes he made or fully trust him again, partly because he can't forgive himself.

The team is focused on trying to find a cure for their memory loss but they also want to ensure that details of the experiments conducted on them and the drugs that Hope McDonald created are destroyed so they can't be used to harm anyone else in the future. That's where Dr Rebecca Walsh comes in. Rebecca is a highly intelligent and well respected doctor who specialises in research into potential cures for Alzheimer's disease. Her research could be the key to unlocking their memories but since she worked with Hope McDonald in the past the team are unsure if she can be trusted. Now it's up to Owen and the others to get close enough to Rebecca to figure out which side she's on, and to find out exactly how much she knows about Hope's experiments.

I know some readers will be familiar with these characters from the original Masters and Mercenaries series but as someone who hasn't had a chance to read those books yet (I've been too busy catching up on Lexi's rereleases of her Bliss and Texas Sirens series!) I am still thoroughly enjoying this spin off. I'm really enjoying getting to know all of the Lost Boys and I have to say Owen might just be my new favourite. Owen is haunted by his past, he betrayed his team to save his mother and sister and they were murdered anyway so he lost the respect of his brothers and his family in one fell swoop, yet he can't remember any of it. He can't properly grieve for the family he doesn't remember and it's hard to win back the trust of the people he should be closest to when he can't even remember why he didn't trust them to help him. There is a real vulnerable side to Owen that made it impossible not to root for him to succeed in his mission.

Rebecca didn't exactly have a normal childhood, a genius who flew through school and college far faster than her peers she never spent much time with children her own age and was always focused on her studies instead. When her mother became sick she put everything on hold to help care for her and watching her slowly being destroyed by Alzheimer's disease left Rebecca determined to find a cure. She is super focused on her career and doesn't trust people easily so it surprises her when she feels such an instant connection to Owen. He's keeping a lot of secrets though so even though the attraction between them is real and intense things are bound to go horribly wrong when she discovers the truth. I loved how open Rebecca was about her desires and what she wanted from her life, she was willing to take risks in both her career and personal relationships but as her past is about to catch up with her she suddenly finds herself in danger. Owen is the first person she wants to turn to for help but there are some things she can't quite bring herself to tell him about so things are going to get complicated fast.

This was an action packed story with lots going on but it never lost focus on the romance, I loved spending time with all the lost boys and getting to learn more about their background and I also really enjoyed the mystery of what was happening in Rebecca's life. Rebecca and Owen make a brilliant couple, they both make mistakes but when it comes down to it they trust each other enough to work together. Rebecca is thrown into the deep end when she realises what Hope McDonald was up to with her research but her reaction was totally believable and after her initial shock starts to fade she comes out fighting. Things are really starting to move forward now and I'm looking forward to reading the rest of the series.