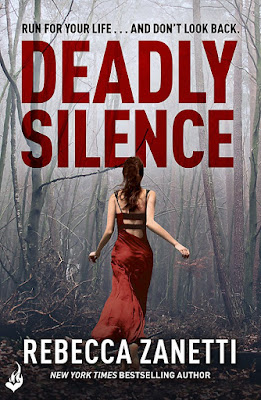 Run for your life... And don't look back.

Paralegal Zara Remington is in over her head. Helping out a friend has put not only her job but her life in jeopardy. Zara needs help from someone she can trust - she just doesn't expect it to be the mysterious PI who recently appeared in her life.

Ryker Jones has problems of his own, including recovering from his investigative agency's recent brutal loss of a client. He wants to keep Zara at arm's length - and protect her from the reality of what he's running from.

But when danger arrives on Zara's doorstep, Ryker can't walk away. He might be the only one who can save her - if his deadly past doesn't catch up with them first...

For more addictive romantic suspense look out for the rest of the titles in the Blood Brothers and Sin Brothers series. And for thrilling passion played out against a dangerous race for survival, look for the titles in The Scorpius Syndrome series: Mercury Striking, Shadow Falling, Justice Ascending.

Review:
I love Rebecca Zanetti's Sin Brothers books so I was excited to dive into Deadly Silence, the first book in the spin off Blood Brothers series. This story introduces us to three new brothers, Ryker, Heath and Denver, raised together in an orphanage they all have questions about their backgrounds that they are trying to find answers to while running their own detective agency specialising in searching for missing people. When a new client asks them to find a mysterious woman they remember from their own childhood it looks like their past and present are about to collide.

Zara has been casually seeing Ryker for months but knows there will never be anything serious between them. That doesn't stop her turning to him for help when one of her closest friends goes missing though and when it looks like Zara may be in danger too Ryker realises that he would do anything to keep her safe. The timing couldn't be worse considering Ryker's past, and his enemies, are about to catch up with him, but Zara needs his help and he could never walk away from her.

Rebecca Zanetti always manages to write books that are full of action and danger but also great characters, strong family bonds and scorching hot romances. Zara and Ryker's relationship is a little different because they're already seeing each other before the story starts but because they've both been trying to keep things casual we still get to see their relationship blossom throughout the book. Ryker was a very overprotective alpha male but Zara holds her ground and she's willing to fight for what she needs and not let him walk all over her which was good. He's actually more willing to pursue a relationship than she is because she has a fear of him walking away and breaking her heart and he could actually be a really sweet guy even though he was also quite demanding and knew exactly what he wanted.

As I've come to expect from this author one of my favourite things about this book was the bond between Ryker, Heath and Denver. The boys aren't related by blood but instead they chose each other and they are very close. They all had awful childhoods that were made even worse in the orphanage where they met and surviving that kind of hell together left them with an unbreakable bond. They've always known that someone from their past is hunting them so they've had to work hard to stay under the radar but when they take on a new client they start to realise that perhaps it's time to confront their past so they can finally move on with their lives. There was a lot to love about their story and I really enjoyed seeing characters from the Sin Brothers books put in an appearance too, I hope we see more cameos from them throughout the series.

I loved all three brothers so much that I've already started reading Heath's book, Lethal Lies, and I expect to be devouring Heath's story, Twisted Truths, immediately afterwards. Sometimes there are huge advantages of not starting a new series until all the books have been published and I intend to make the most of them!