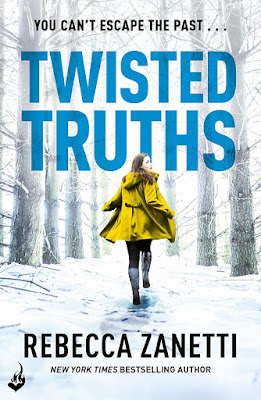 Noni is desperate. Her infant niece has been kidnapped, and the only person who can save her is a private detective with too many secrets to count - and more enemies than he can name. A man who walked away from Noni without any warning a year ago and broke her heart. But with Talia's life on the line, Noni won't take no for an answer...

The moment Denver Jones sees Noni, the memories come rushing back. The fire in her eyes. The determination in her voice. The danger of having her in his life. Denver had to push her away once, but now with vicious criminals threatening Noni and her niece, he'll do whatever it takes to protect them. But enemies from his past are circling, and they'll use anything - and anyone - to get to Denver.

Review:
Twisted Truths is the final book in Rebecca Zanetti's Blood Brothers series and it's definitely the one I was most excited about. Poor Denver has been pining for Noni since the beginning of the trilogy, he met her and fell in love before the series started but broke both of their hearts by walking away. He knows he left to protect her but she has no idea why he up and left without even saying goodbye. Noni never thought she'd see Denver again but her niece has been kidnapped and she needs help desperately, desperately enough that she's willing to ask the man who broke her heart for help.

There is no way Denver can turn down Noni's request for help, especially now that she's put a target on her back by very publicly searching for him on the internet. Even if he wasn't still in love with her he wouldn't be able to leave a young baby in the hands of a brutal gang though. Denver will do whatever it takes to keep Noni safe and to bring Talia home but he's going to have to work fast if he wants to do it before Maddison and Cobb catch up with them both.

I already loved Denver but it was so great to see him finally fighting for his chance at happiness. He's always been willing to risk his life so that his brothers will survive but once he starting to see the kind of future he could have with Noni it gave him even more strength for the battle. Denver has always been the silent one of the group and Noni used to let him get away with keeping secrets the first time they dated but now she's not willing to let him get off so easily and I loved how she kept pushing him for answers. They make such a fab couple, the chemistry between them was intense from the beginning but there was so much more to their relationship than just sex.

Dr Madison has been the evil at the centre of both the Sin Brothers and Blood Brothers series so I can't tell you how satisfying it was to finally have everything come to a head. This is a battle Denver, Heath and Ryker can't win alone though and that means bringing in the Dean brothers too which made it even better. This was a fantastic conclusion to both of these series, I'm going to miss these characters but at the same time I'm glad they're going to get to enjoy their HEAs now without the constant threat of Madison and her soldiers hanging over their heads.