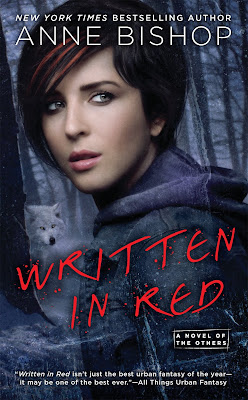 Enter the world of the Others in the first novel in New York Times bestselling author Anne Bishop's thrilling fantasy series: a place where unearthly entities--vampires and shape-shifters among them--rule the Earth and prey on the human race.

As a cassandra sangue, or blood prophet, Meg Corbyn can see the future when her skin is cut--a gift that feels more like a curse. Meg's Controller keeps her enslaved so he can have full access to her visions. But when she escapes, the only safe place Meg can hide is at the Lakeside Courtyard--a business district operated by the Others.

Shape-shifter Simon Wolfgard is reluctant to hire the stranger who inquires about the Human Liaison job. First, he senses she's keeping a secret, and second, she doesn't smell like human prey. Yet a stronger instinct propels him to give Meg the job. And when he learns the truth about Meg and that she's wanted by the government, he'll have to decide if she's worth the fight between humans and the Others that will surely follow.

Review:
Let me introduce you to a world where humans aren't the dominant species. In fact humanity's very existence relies on the tolerance of The Others, all the different supernatural creatures that came before us and still own the land we live on, the food we eat and even the water we drink. The Others, also known as terra indigene, come in all kinds of shapes and sizes, some have animal forms (wolves, bears, coyotes, crows & many more), others are vampires (but not quite the vampires we're used to), there are also elementals and all kinds of different creatures. They all tend to have a human form but they don't think or act like humans do and they're definitely dangerous.

The Others don't have a very high opinion of humans, most of them think of us as a potential food source and they don't think twice about eating anyone who crosses them so be very careful not to step foot in their territory uninvited. Humans are allowed to live in certain areas and for the most part if they leave the Others alone then they're free to live their daily lives in whatever way they choose, cross them though and your lives are forfeit. There are very few places that the two groups cross paths and one of those is at the Lakeside Courtyard, home to a group of Others and mostly kept behind closed walls they do have a few outward facing businesses that humans are allowed to enter.

Enter Meg, she's a human but a rather rare and special one, she's a cassandra sangue or blood prophet, someone who gets glimpses of the future but only through blood and pain. The cassandra sangue are rare and in high demand because of how valuable their prophecies are, they are also unprotected by human laws and considered property that other people can own. Meg grew up in captivity, all her experience of the world comes from lessons and the prophecies she has seen rather than real experience and a lot of things are extremely confusing to her because of that. She managed to escape from her "Controller" and when she came across Lakeside Courtyard, a place where human laws do not apply, she sought sanctuary by applying for a job as their human liaison.

I'm not going to say much more about what happens in the book, it's fairly easy to guess that the people Meg escaped from want her back and will go to great lengths to make that happen but once the Others have accepted her into the very small group of people they trust they will do whatever it takes to protect her. Even if that means full out war with humanity.

This book had me captivated from the very first page, I'm already a fan of Anne Bishop's Black Jewels series so I had high hopes when I started reading Written in Red but even then I was surprised by how much I loved it. The world building is phenomenal and totally different to anything else I've come across even though I'm a huge urban fantasy fan and have read a lot of books in this genre. The characters are all unique and interesting, I loved the way the various shifters still act more like their animal counterparts even when in their human shape, Winter and the elementals were great and I can't wait to find out more about Tess, a mysterious species of terra indigene that all of the others are slightly afraid of. There was darkness (many humans end up getting eaten, but only ones who deserve it and Meg can only see prophecies by cutting herself) but also humour, great friendships, strong family bonds, adorable baby werewolves, hilarious crows who like building things and refuse to give people their change if the coins are shiny, grumpy werewolves, magical ponies, trickster coyotes, vampires who can drink your blood with just a touch, human police who are trying to prevent a war and one blood prophet who is just trying to find her way in a world that is completely alien to her.

I loved everything about this book and I can't wait to read the next one so I'm diving straight into Murder of Crows now and I have a feeling I'm going to be binging this whole series over the next couple of weeks.