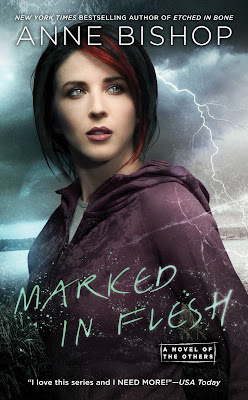 In the fourth novel in Anne Bishop's New York Times bestselling series, the Others will need to decide how much humanity they're willing to tolerate - both within themselves and their community...

Since the Others allied themselves with the cassandra sangue, the fragile yet powerful human blood prophets who were being exploited by their own kind, the dynamic between humans and Others has changed. Some, such as Simon Wolfgard, wolf shifter and leader of the Lakeside Courtyard, and blood prophet Meg Corbyn see the closer companionship as beneficial.

But not everyone is convinced. A group of radical humans is seeking to usurp land through a series of violent attacks on the Others. What they don't realize is that there are older and more dangerous forces than shifters and vampires protecting the land - and those forces are willing to do whatever is necessary to safeguard what is theirs...

Review:
As a species humans really are pretty stupid. The Others may call us "clever meat" but really a large majority of us are so stupid you could almost call us suicidal. Rather than learn from the lessons the terra indigene tried to teach them in the previous book the members of HFL decide they're going to continue the attacks, this time with devastating consequences for both the Others and for humanity. Now the humans have the attention of the terra indigene Elders and they're throwing around words like "total extinction". All that remains to be seen is how many, or how few, people will survive when the Elders come calling.

I've been so hooked on this series that I devoured the first four books (about 2000 pages!) in five days, I made every excuse I could come up with to spend as much time as possible reading and I think I've actually given myself eye strain because today I'm having too much trouble focusing to dive into book five. Anyway, that's my really long winded way of telling you that I absolutely LOVE this series. Everything about this world is fascinating to me, I love that humans are at the bottom of the food chain, I've really enjoyed getting to know all the different characters who live in the Lakeside Courtyard and I was desperate to know what would happen when the Elders came calling.

Unfortunately we have to witness some pretty terrible attacks on the Others first though. Is it weird I was more upset when the werewolves were attacked than I was when humans were facing possible extinction? I honestly don't care if that's weird because very few humans in this world actually deserve to survive so I'd be quite happy to see most of them wiped off the face of the planet. Obviously I'm not talking about Meg, her human pack or even the Others friendly police officers but anyone who had a membership card for the HFL would make a very tasty Elder snack in my opinion!

Anyway, we finally get some pay off in terms of the Others fighting back, the Elders have watched, they've listened and they've learned and now they're ready to treat humans the way they deserve to be treated. My one slight complaint was that I wanted to see certain people suffer a bit more, I'm not normally one for graphic violence but I would actually have enjoyed more here! I also really wanted more Meg and Simon, of course we do see a lot of them but what I'm desperately waiting for is some payoff in the romance department. Can someone just smash their heads together and MAKE THEM KISS! Please, for the love of God lets bring this romance to the boil because the slow build that I was enjoying so much in the beginning is starting to kill me!

Yes, I am possibly a little too invested in this but I've spent more time in the book world than I have in the real one this week so the lines between fantasy and reality are starting to blur. Surely that's a sign on Anne Bishop's fantastic writing though? I can't recommend this series highly enough!