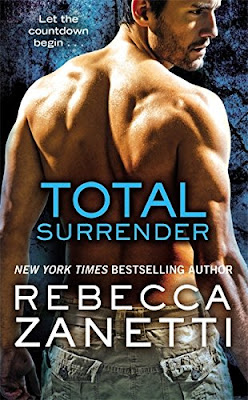 Piper Oliver knows she can't trust him. They warned her that the tall, dark, and sexy black-ops soldier Jory Dean would try to win her over with his steel-gray eyes and deadly charm, but she won't be conned by this man they call a traitor. All she has to do is figure out the science necessary to save his life, and she's done. Something isn't adding up, though, and she won't rest until she uncovers the truth-even if it's buried in his deep, dangerous kiss.

Jory will do anything to reunite with and save his brothers-even kidnap the gorgeous woman who's working to deactivate the deadly chip in their spines. But the forces determined to destroy his family won't let them go so easily. Keeping Piper alive is more than he bargained for-and so is his burning desire for her. But with every second bringing him closer to certain death, can he afford to lose himself in her hot and willing embrace?

Review:
As much as I've loved all the books in the Sin Brother's series Jory's story is the one I've been desperately waiting for since the very beginning. We've not had a chance to get to know him in the previous stories because he's been missing this whole time but we've seen glimpses of him as a child through all of his brother's eyes and I was desperate to see them all finally reunited. It turns out that Jory has been back in the Commander's control for the last few years, the video the brother's saw of him being shot wasn't faked and he was in a coma for years before requiring huge amounts of physiotherapy to get back on his feet. Now he's physically as strong as ever but the death chip implanted in his spine was damaged by the bullet and unless the Commander's top doctors can find a way to connect to it and enter the deactivation code he only has weeks to live.

Piper has been given the task of fixing Jory's chip. She has been told she is working with a traitor to her country and that they need her to save him so that they can get information about terrorist plans but she has no idea that Jory was actually the Commander's own creation. Piper has every reason to distrust Jory but the longer she spends with him working to fix the chip the more she realises that things aren't adding up around her and starts to question what she's been told. Jory will do anything to escape and get Piper back to his brothers so that she can deactivate their chips, he knows there is no chance for him because of the damage to his chip but he wants to save the others and he wants to see them one last time before he dies.

This whole series has been fantastic but I think Total Surrender was my favourite, I loved getting to know both Jory and Piper and it was brilliant to catch up with the previous couples too. There are some incredibly surprising revelations in this book and we get to see the family grow in more ways than one. Jory and Piper's romance was spot on, they go from wary strangers to reluctant allies to much, much more and I admired Piper's determination to do whatever it took to save her man and his brothers. I also love the strong bond between the Dean family, I waited a long time to see the brother's reunited and I'm not going to lie there were tears in my eye when they finally found each other again. This series has everything I want from a romantic suspense and I'm absolutely thrilled that there is a spin off series too, I can't wait to meet the Blood Brothers in Deadly Silence!