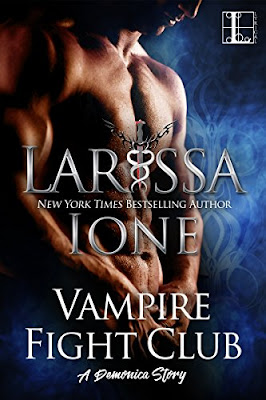 New York Times bestselling author Larissa Ione tempts you into the darkly irresistible world of Demonica, populated by angels and demons, shifters and humans, all with a thirst that must be quenched . . .

When a wave of violence that hits too close to home forces shapeshifter and underworld nurse Vladlena Paskelkov to go undercover, her first stop is a haven of vice—with a dangerously sexy vamp in charge . . .

Legendary, jaded, Nathan Sabine is the manager of Thirst, a wildly popular vampire club—and secret underground blood arena. But Nathan, a rare daywalker, possesses other, even more explosive secrets, as does his beautiful new medic, Vladlena. The one thing they can’t conceal is the lust that simmers between them . . .

Now, in an underworld divided by revelry and violence, debauchery and vengeance, Nate and Lena will discover which risks are worth taking—and which desires demand surrender . . .

Review:
Vampire Fight Club is a novella set in Larissa Ione's Demonica world that was initially published in the Supernatural anthology and is now available as a separate ebook. I'm a huge fan of this series but had somehow managed to miss this story so I'm really pleased I discovered it now. Obviously the novellas in this series focus heavily on the romance and because there is less page time there isn't usually a huge side plot going on but Larissa always finds a pretty good balance between developing the character's relationships and creating some kind of external tension too.

Lena is living on borrowed time but before she dies she is determined to find out how her brother died and make someone pay for it. She has taken time off from her job at Underworld General to go undercover at Thirst, a popular vampire club that may also have links to a secret underground fight club. Nathan is a rare vampire with the ability to daywalk, he started working at Thirst looking for vengeance but years of following the enemy's orders have left him completely hollow and longing for death. Lena is like a breath of fresh air and meeting her convinces Nathan that life might be worth living after all but first they need to work together to bring down the fight club once and for all and that puts them at odds with a dangerous enemy.

I love Larissa Ione's writing and thoroughly enjoyed Vampire Fight Club. Lena and Nathan were both great characters who have been through a lot but together they are able to find something positive to strive towards. Their romance was enjoyable and they had brilliant chemistry too. It was great to get the chance to see some familiar faces at Underground General, it reminded me how much I loved the early books in this series and made me think it's probably time for a reread!

Source: Initially received from publisher via NetGalley in exchange for an honest review