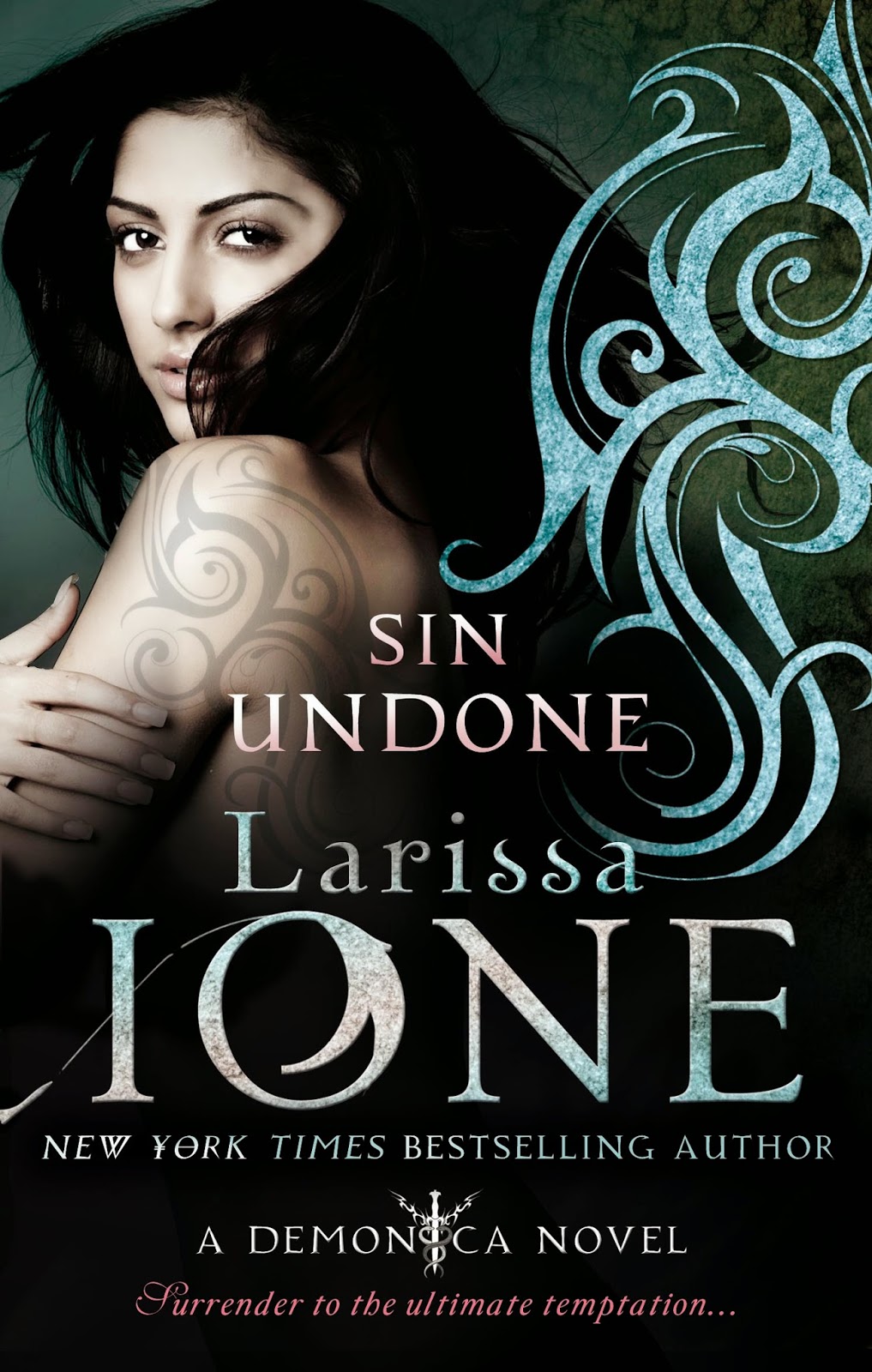 HER TOUCH IS DEADLY
As the only female Seminus demon ever born, master assassin Sinead Donnelly is used to being treated like an outcast. She spent decades enslaved, and now vows she'll die before she'll relinquish her freedom again. Then Sin's innate ability to kill her enemies goes awry: She creates a lethal new werewolf virus that sparks a firestorm of panic and violence.

HIS HUNGER CAN'T BE DENIED
Half-werewolf, half-vampire Conall Dearghul is charged with bringing in Sin to face punishment for the plague. And she's no stranger: He's bound to her by blood, and the one sexual encounter they shared has left him hungering for her raw sensuality. Worse, Sin is the underworld's most wanted and Con soon leans he's the only one who can help her . . . and that saving her life might mean sacrificing his own.

Review:
I am a massive fan of Larissa Ione's books, I love her Demonica series and have been really enjoying the Lords of Deliverance books too so I have no excuse for why I hadn't read Sin Undone before now. This is a pivotal book that ends the Demonica series and leads into the Lords of Deliverance books so I knew I'd picked up spoilers by reading Eternal Rider first and I think that's why I held off for so long. Anyway, if you're going to read the last book in a series you want to it to go out on a high note, I know a lot of the characters make appearances in the spin off but this is really the book that ties things up nicely for the Seminus brothers and their rather unique sister Sin. Luckily Larissa Ione always manages to exceed my high expectations so I loved Sin's story.

Sin is the only female Seminus demon and although she is close to her twin brother Lore she has never wanted to get to know their other brothers Eidolon, Shade and Wraith. She brushes them off like she doesn't care but in reality she is scared to let them in, she has been through so much in her past that she is nervous about letting anyone get close enough that they could hurt her. Although she acts like a tough master assassin (and in many ways that's exactly what she is) she is also surprisingly vulnerable and my heart went out to her. She took on the role of master assassin at the end of Ecstasy Unveiled so that Idess wouldn't have to and now she is stuck in a job she never wanted and has to die to get rid of. She also finds herself forced into close contact with Eidolon as he tries to find a cure to the werewolf plague she started by accident with her Seminus "gift".

Half vampire and half werewolf Con has been asked to ensure that Sin helps discover a cure to the plague and then he must bring her in for punishment. There may be chemistry between them but Con believes that she started the plague on purpose and is disgusted with her because of it. But no matter how bad his opinion of her is he still finds the lure of her blood irresistible and quickly finds himself verging on a blood addiction. I loved the banter between Con and Sin from the beginning but I really loved how Con breaks down her walls and sees the person she tries to keep hidden from the world. He sees the vulnerable and soft side of her and he falls for her because of it. The couple are so well suited and I loved the way they worked through their problems so they could be together.

With Sin being a succubus who needs regular sex to survive Larissa Ione doesn't skimp on the sex scenes in Sin Undone but they don't overtake the storyline and we get plenty of action alongside the steam. We also get to catch up with the other brothers and their respective mates, as well as some of the other side characters we've come to know so well and paramedic Luc gets a little romance of his own. I love the way the author manages to include so many different plot threads without them ever overtaking the main couple's story - they just compliment it and make the book an even more satisfying read. If you haven't read anything by Larissa Ione yet then I can't recommend her highly enough but I would definitely suggest starting with the Demonica series and then moving onto the Lords of Deliverance books afterwards so you can watch the full back story unfold without picking up spoilers.