Review: No One to Trust - Katie Reus 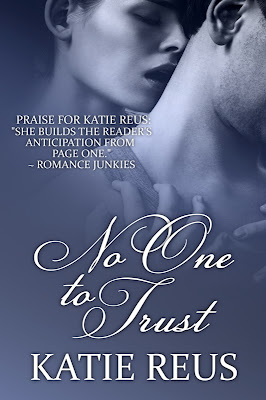 Computer security specialist Elizabeth Martinez has never been able to turn her back on her brother Benny. When his risky lifestyle finally lands him in harm’s way, Elizabeth finds herself dragged into the dangerous underworld with him and into the cross hairs of one of Miami’s death-dealing drug lords. Only after her ex-boyfriend saves her does she realize she might have no choice but to depend on the one man she has tried so desperately to forget.

Former Marine Porter Caldwell never should have let Elizabeth walk away from him all those months ago. She means more to him than anything and now that she’s in danger and turned to him for help, he won’t make that mistake again. When a local gang targets her and she’s nearly killed in a drive by shooting, Porter vows to do whatever it takes to keep her alive. Even if it means turning his back on all that he’s sworn to uphold.

Red Stone Security Series:
No One to Trust
Danger Next Door

Review:
As the only member of her family still talking to her brother Benny, Elizabeth finds it impossible to say no to him when he comes to her for help. But helping Benny puts her life in danger and when she finds herself under fire from a drug dealer her ex-boyfriend steps up to keep her safe. Porter can't stand the idea of Elizabeth being in danger - especially because of the junkie brother who came between them when they were dating - and will do anything to keep her safe. The attraction they feel for each other has never faded and Porter is determined to woo his woman while he rescues her.

This was just the kind of story I was looking for, I wanted something that I could finish in one sitting - something with action, romance and a few hot scenes to keep me entertained and No One to Trust hit the spot perfectly. Both of the main characters are likeable, the relationship felt believable and because they have a history together it didn't feel rushed. I also really liked the side characters with Porter's brothers Harrison and Grant on the scene - in fact I was really pleased to find Grant's story is already available (called Danger Next Door). This is a whole family of tough ex-military men who all work in law enforcement and private security and I have a feeling I'm going to fall for them all!

The action kicks off right from the beginning as you watch Elizabeth walk into the home of a major drug boss to rescue her brother. I have to admit it was a bit frustrating how willing Elizabeth was to put herself in danger to rescue Benny - I wanted to shout at her to let him fix his own messes for once! Having said that as you find out more about their history you understand why she feels the need to be there for him and you have to admire Elizabeth for being so loyal to her family. Anyway, the pace was really good and pretty non-stop from start to finish but I also loved the chemistry between Porter and Elizabeth. There was something raw about this couple that really drew me in. This was the first story I've read by Katie Reus but I've already purchased Danger Next Door and am looking forward to reading it next.