Quick Review: The Assassin and the Underworld - Sarah J Maas 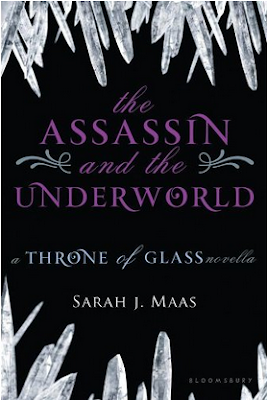 When the King of the Assassins gives Celaena Sardothien a special assignment that will help fight slavery in the kingdom, she jumps at the chance to strike a blow against an evil practise. The mission is a dark and deadly affair which takes Celaena from the rooftops of the city to the bottom of the sewer–and she doesn’t like what she finds there.

Review:
The Assassin and the Underworld is the third of four prequel novellas that are being released in the run up to the publication of Sarah J Maas' debut novel Throne of Glass in August. I've been dying to get my hands on the book for months now so I couldn't resist picking up the novellas while I was waiting.

I've been really enjoying these novellas and they are definitely achieving the goal of building my excitement for the full length book but I have to admit that Celaena can be a bit of a frustrating heroine at times. After the things that her boss and mentor Arobynn (the King of the Assassins) has done to her in the past I found it hard to believe that she would so willingly stay with him after returning from the red desert - especially when she now has the means to make her escape. I was also surprised that she was able to trust him so quickly and I have to say I'd guessed the major plot twist fairly early on.

However, I still liked the story and I loved the fact that Sam was back in this novella - I'd really missed him in the 2nd one! He is such a great guy and I love the way he looks out for her. I do get frustrated with her for the way she treats him though and sometimes wonder if she really deserves him. She is quite young though and can sometimes be ridiculously naive so I'm hoping we'll get to see a lot of growth in her character as the story continues in Throne of Glass. I will definitely be picking up a copy of The Assassin and the Empire when it is released in July and I can't wait to get started on Throne of Glass!