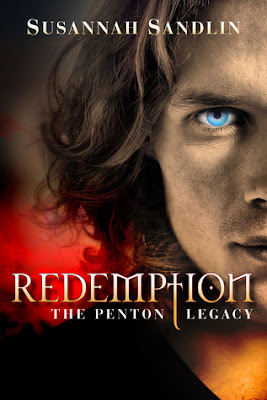 The world’s vampire population is on the brink of starvation since the vaccine to treat a global pandemic rendered human blood deadly to them. Their only hope for survival is a handful of rural areas that the vaccine never breached.

The tiny town of Penton, Alabama, is one such enclave, where the immortal Aidan Murphy has established a community of vampires and their willingly bonded humans. Together, they live in peace—until Aidan’s estranged brother descends upon the town and begins attacking its humans. Whether the rampage is a result of his centuries-old feud with Aidan or the civil war threatening to erupt in the vampire world matters not. All that matters is the blood.

Desperate to save his adopted family, Aidan breaks one of his cardinal rules, kidnapping an unvaccinated human doctor—and unexpectedly falling in love for the first time in nearly four hundred years.

Sensual and thrilling, Redemption is the first instalment of what is sure to be a darkly addictive new series from paranormal romance novelist Susannah Sandlin.

Review:
After a devastating virus reduced the world's human population and then the vaccine to treat the global pandemic left the blood of most remaining humans poisonous, many vampires now find themselves on the verge of starvation. Competition is fierce for the few humans who didn't have the vaccine and vampires are forced to fight for their food. Master vampire Aidan has created a community for vampires and unvaccinated humans to live together in harmony. The vampires protect the humans who have bonded to them and willingly offer their blood in return for their safety. Aidan and his lieutenants have worked hard to create an environment where humans and vampires alike are all treated like family and they are very careful about who they let join them. Everything they have worked so hard to build is threatened when Aidan's brother Owen arrives. Estranged from Aidan for centuries Owen is still holding a grudge and he is determined to destroy his brother and the community he has created. After the death of the town doctor, and a spate of horrific attacks on the humans under his care Aidan is forced to take drastic action to ensure they have medical care available. Kidnapping human doctor Krys goes against everything he believes in but he has no choice. What he doesn't expect is to fall for his captive but can she ever get past the fact that he kept her there by force?

Redemption was an interesting start to a new series and I'm curious to see where the author takes the story next. I really liked the idea of a world where most humans are no longer a viable source of blood for the vampires. It made a change to see vampires starving because they can't find unvaccinated humans to feed from - vampires are normally at the top of the food chain so this was an interesting twist. Especially when vampires can't feed from bonded humans unless the bond was created by them or another vampire in their scythe. This offers an extra level of protection to anyone who is living in Aidan's community.

I liked Aidan, he is genuinely a good guy (well, good vampire lol) and he cares for both the vampires and humans under his protection. He has created an ideal society that he works hard to maintain and he wants the best for everyone. I would have liked him to have been a bit more alpha than he was - at times he was a bit too down on himself, never really feeling he was worthy of love - but he was quite sweet really. I just tend to expect my vampires to be darker and more growly, bossy alpha males so it was an unusual change.

Krys was a strong woman who had a difficult past with an abusive father that she has spent years trying to put behind her. She was very adamant that she would never allow anyone to have control over her again so I found it a little hard to believe that she fell for Aidan quite so quickly - especially considering he has her locked up as a prisoner most of the time. I expected someone as outspoken as she was to put up more of a fight. When she finally did try to make an escape it was more of an afterthought and I felt she was stupid to obviously put herself in danger when she had passed up much safer opportunities to get away. Her escape attempt felt like more of a plot device to put her in harms way than a genuine attempt to flee.

I did like the chemistry between the main characters though, the sex scenes weren't quite as graphic as they often are in paranormal romance but they were still enjoyable and the couple had a genuine connection even if their relationship felt rushed. I also liked the side characters - both human and vampire - and am interested in getting to know them all better. I'm particularly hoping to find out more about Mirren who seems like the fiercest of the vampire lieutenants and also Hannah who was changed into a vampire when she was just a child and has some interesting abilities. This is a series that definitely has potential and I'll be keeping an eye out for the next instalment.