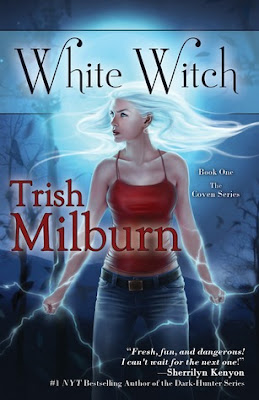 Witchcraft Is Her Family’s Business.
No One Quits The Family And Lives To Tell About It.

“Jax” Pherson has power, enough power to know her future will end in service to the dark coven her father controls. Unless she can stay hidden in a small community in the mountains of North Carolina. She must find a way to live without magic and deny the darkness she feels welling up inside her-the same dark power that fuels the covens around the world. All she wants is a normal life. A boyfriend. Friends. Some place to belong, but all too soon Jax’s barely begun new life hangs in the balance when she discovers that the boy she’s attracted to is sworn to kill her kind. He’s a hunter with good reason to kill everything that goes bump in the night. Even the most fleeting use of her power is tantamount to signing her death warrant and will bring both hunter and coven down on her. But can she walk away when her friends are threatened by an old evil? Something created by the magic of witches? Jax’s only hope of survival is to convince the boy she loves to forget everything he’s ever been taught and help her find a way to fight the covens. To believe there is some good in her.

Review:
Jax comes from a family of powerful witches but she hates the dark magic that they use. All she wants is to make her own way in the world and have a normal life doing normal things like attending school and making friends. The coven her father is in control of is more like a criminal gang and nobody is allowed to leave and live to tell the tale. Even her mother was executed when she attempted to take her children and make a new life for them all. Jax has been planning her escape for years but she knows if she is ever caught her coven will make an example of her and she will suffer a horrible death. She has settled into her new small town in the mountains and knows she mustn't use her powers or she risks being tracked by her coven. For the first time Jax is making friends and she has even found a boy she likes. She hopes that Keller will be her first boyfriend but that was before she realised that he was a hunter - someone who has vowed to kill her kind. Can love really overcome all or will the hunter turn on her if he finds out what she is? Worse still will her coven catch up with her and what would happen if they did?

White Witch is the first instalment in a new trilogy by Trish Milburn and was an interesting start to the series. The idea of the covens practising dark magic and acting more like dangerous criminals was really interesting and I could understand why Jax was so desperate to escape and make a life of her own. Her father sounds particularly cruel - especially the way he killed her mother in front of her with the whole coven watching so I'm not surprised that she is terrified of getting caught. You have to suspend belief a bit to accept that a 16 year old girl could drive half way across the country and set up home on her own after buying her own camper van but I often find that YA stories require a bit of that so it didn't worry me too much. I think it helped that the heroine had mind control type powers so it felt like it would be possible for her to deflect unwanted adult attention.

I enjoyed watching Jax try to settle into her new life in Baker's Gap. I felt that the romance with Keller was a little too rushed in the beginning but I liked the chemistry between them and felt they were a good fit for each other so I can forgive that. I particularly liked her friendship with Tori though. Jax has never really had friends before so it was nice to see her bonding with another girl and not just spending time with her love interest. I loved Tori's Joss Whedon T-Shirts - you can never go wrong with Buffy quotes in my opinion! The arrival of Jax's witch friend Egan made things interesting but I did find a couple of things rather predictable (like Tori's reaction to his arrival).

White Witch was a quick and easy read and left me wanting to pick up the sequel Bane instantly to find out what happens next. The action scenes at the end were well written, fast paced and definitely set the scene for the second instalment. An interesting start to the series and I look forward to seeing where the author takes things next.