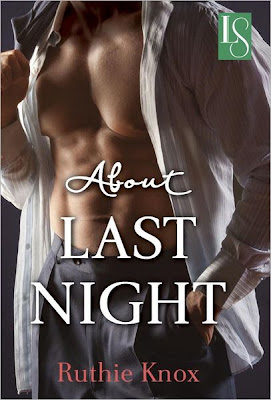 Cath Talarico knows a mistake when she makes it, and God knows she’s made her share. So many, in fact, that this Chicago girl knows London is her last, best shot at starting over. But bad habits are hard to break, and soon Cath finds herself back where she has vowed never to go . . . in the bed of a man who is all kinds of wrong: too rich, too classy, too uptight for a free-spirited troublemaker like her.

Nev Chamberlain feels trapped and miserable in his family’s banking empire. But beneath his pinstripes is an artist and bohemian struggling to break free and lose control. Mary Catherine—even her name turns him on—with her tattoos, her secrets, and her gamine, sex-starved body, unleashes all kinds of fantasies.

When blue blood mixes with bad blood, can a couple that is definitely wrong for each other ever be perfectly right? And with a little luck and a lot of love, can they make last night last a lifetime?

Review:
Cath moved from the US to London to make a fresh start for herself, she desperately wanted to leave her bad girl past behind and has worked hard to become a new improved version of herself. She doesn't drink, she doesn't date and she has become very focused on her job at a museum. When the only way to convince her friend to let her borrow an item for the museum display she is working on is to agree to a double date she quickly finds herself out of her depth. Waking up in a strange bed, with no memory of how she got there she is horrified to think that she has slipped back into old habits. But Nev didn't take advantage of her, he recognised her from the commuter train they usually share on the journey to work and took her home to make sure she was safe. Cath is determined not to get involved with a man again but Nev is equally determined to make her his. Opposites really do attract but can they have a successful relationship?

OK so I'll admit it - the main reason I was drawn to this book was the cover, I mean come on, just look at it and tell me that isn't one HOT cover!! I was a little worried when I found out the main character was called Neville though - I hate to say it but it's not really the sexiest name out there is it? Anyway, I'm very happy that Nev (or City as Cath calls him through most of the story - hooray for nicknames because I love him much more as City!) more than lives up to the cover image and he completely stole my heart.

Nev may be incredibly sexy to look at (and don't you just love a man in a suit?) but Cath has always thought of him as a straight laced, upper class banker who would have no interest in someone like her. In reality he has the soul of an artist and hates his job working for the family bank, he may come from money but he dreams of making a living with his paintings. The attraction between Cath and Nev is off the charts and the passion between them was enough to melt my kindle. There are definitely some scorching hot scenes between them but Cath is running scared. What starts as an intense affair quickly turns to more but she is terrified by the idea of a relationship. I love how patient Nev is with her and the way he slowly sneaks his way under her defences almost without her realising how hard she is falling for him. He did act like a bit of a twit for a few minutes towards the end of the book but he'd more than made up for it by the end.

About Last Night is a fabulous contemporary romance and one that has definitely added Ruthie Knox to my list of authors to watch out for. I'm looking forward to picking up her previous book Ride with Me very soon. If you're looking for a light hearted but sizzling romance then you can't go far wrong with this one!

Source: Received from the author via Netgalley in exchange for an honest review