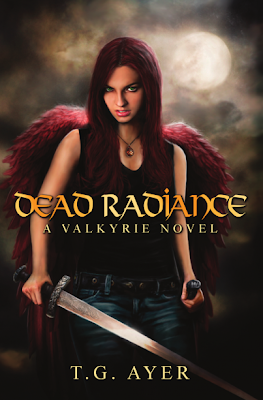 That day I knew for sure. I'd lost control of my tears then. They fell in huge, mocking drops. I stared at Joshua through those bitter tears, my heart missing beats as I tried to remember to breathe.

I finally knew what the glow meant.

I was a freak and Joshua was going to die.

Bryn Halbrook had always seen the glow. But it is only when her best friend dies that she discovers the meaning of those beautiful golden auras — Death. Alone, lost in the foster system, she struggles to understand who she is and why she was cursed with the ability to see the soon-to-be-dead.

The new foster kid, Aidan, isn’t helping any. Mr. Perfect seems to fit in no matter what, making her feel even more pathetic. But when his affections turn to her, Bryn finds him hard to resist. Impossible actually. A mystery himself, Aidan disappears, leaving behind a broken heart and a mysterious book that suggests Bryn might not be entirely human.

Bryn stands at the threshold of a journey of discovery. Will destiny help her find herself, find her purpose and her place in a world in which she’d never belonged?

Review:
Ever since the death of her father Bryn has spent her life moving from one foster home to another, never staying in one place long enough to make friends and never feeling like she fits in. But her latest foster home is different, Ms Custer seems to really care about her and Bryn has grown to love her foster siblings Simon, Brody and Isabel. She's even been at the same school long enough to make friends, well one friend in particular - Joshua. All of her life Bryn has sensed a glow around certain people but she has never stayed in one place long enough to figure out what that glow means. When Joshua starts to glow it makes her uncomfortable but she doesn't immediately realise how serious the consequences are. It is only after another student with the glow dies that she puts it all together and realises that Joshua doesn't have long left. Helpless to prevent his death Bryn is devastated to lose her one and only friend and is treated like an outcast by the rest of the town for being the only survivor of the accident that kills him.

When new foster kid Aidan comes to stay Bryn finds herself drawn to him but it's obvious he is keeping secrets and she can't decide if she should trust him or not. As wary as she is of him Aidan still manages to find his way under her skin and he is the first person she ever tells about the glow she sees. When Aidan skips town not long afterwards it looks like her fears were correct and she is left feeling heartbroken and confused. But after discovering a book Aidan left behind Bryn soon uncovers a bigger secret - one that could unlock her past and explain her strange ability. Bryn quickly finds herself swept into a world of myths and legends come to life - not only are these creatures real but she is one of them!

I have to start with saying what a fantastic debut Dead Radiance is and I can't wait to get my hands on the sequel Dead Embers. T.G. Ayer's has done a fantastic job of bringing Norse mythology to life and I absolutely loved finding out more about Valkyries and some of the different Norse gods and goddesses. I haven't read many books about Valkyries (especially in the YA genre) and the ones I have didn't go into anywhere near as much detail about the legends surrounding them and the abilities that they have. I didn't know a great deal about Norse mythology so that side of the story was fascinating to me and I'm looking forward to finding out more throughout the series.

Bryn is a great character and it was easy to feel for her especially in the beginning when she is such an outsider and finds it so hard to fit in. I found myself heartbroken for her and really wanting her to make friends and find some happiness. As she starts to realise what the glow means things get very difficult for her, she knows that certain people are dying but she has no way to prevent their deaths which just makes her feel more useless than ever. When she uncovers more about her background and finds herself in a whole new world she really starts to come into her own as she makes new friends (and new enemies!) and starts her training.

Aidan was a swoon worthy guy who rides into town on a motorbike wearing leather and looking hot. At first I thought he was going to be your typical bad boy (nothing wrong with that - I do like a bad boy!) but it was a nice surprise to find there was so much more to him than that. He is also very smart, a bit of a geek and he is the one person who knows more about Bryn than she knows about herself. He is keeping secrets that I'm not going to go into because I don't want to spoil things but he comes through for Bryn in the end and pays a high price for it. There is great chemistry between the two of them but I have to admit I felt their relationship developed a little too quickly - I wanted to see a bit more of them getting to know each other first.

The beginning of the story is a little slow as we get to know Bryn and find out about her history but I still found it interesting to read. Things really picked up for me when she starts to uncover who she is though and from that point on I didn't want to put the book down. I loved the whole section at Asgard and I really enjoyed the quest that she is sent on towards the end of the book. It was great to get to know some of the secondary characters and I'll be really curious to see what roles they play as the series continues. Dead Radiance is an original story and one I would highly recommend to fantasy fans or anyone interested in learning more about Norse mythology. This is a series I'm really looking forward to continuing & I'm glad I don't have too long to wait before the second book is available.