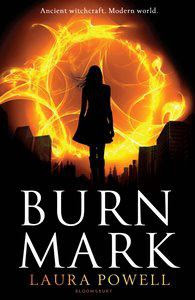 Glory is from a family of witches and lives beyond the law. She is desperate to develop her powers and become a witch herself. Lucas is the son of the Chief Prosecutor for the Inquisition—the witches’ mortal enemy—and his privileged life is very different to the forbidden world that he lives alongside.

And then on the same day, it hits them both. Glory and Lucas develop the Fae—the mark of the witch. In one fell stroke, their lives are inextricably bound together, whether they like it or not . . .

Review:
Burn Mark is a great debut from Laura Powell and I'm hoping that it is the first book in a series because I'd love to spend more time with these characters! I loved the combination of the supernatural witches alongside the mob style crime families in the East End. The mix of the old fashioned Inquisition (complete with the traditional burning of witches at the stake) but set in modern day London makes for frightening reading. I'm pretty sure most of us are horrified to look back at the past and the things that the Inquisition did so I really don't like the idea of that continuing through the ages into London today. It's those combinations that make this so different from anything else I've read before though and that's why I enjoyed it so much.

Glory is from a powerful witch family, one who has strong connections to the criminal underworld. All Glory has ever wanted is to come into her powers and she dreams of becoming the head witch of her coven and leading them back to the top. However, it turns out that being a witch isn't quite what she always expected it to be and her uncle has plans for her future that she isn't at all keen on. Lucas comes from a family of dedicated witch hunters, for twelve generations they have worked for the Inquisition and he has always planned on following in his ancestors footsteps. Never in a million years did he expect to become a witch - it's like his worst nightmare. Glory and Lucas both come into their powers on the same day and fate draws the two of them together as they work to bring down one of the most powerful crime syndicates in London.

Both Glory and Lucas are great characters, in a lot of ways they are complete opposites of each other but as they get to know each other they soon find they have a lot more in common than you would think. I really enjoyed watching them getting to know each other and building trust between them. I think one of my favourite things was watching Lucas' relationship with his father after he admitted he was a witch. As the Chief Prosecutor for the Inquisitorial Court I expected a certain reaction from his father but was pleasantly surprised by his attitude.

It was interesting to see how witches are treated as second class citizens and blamed for anything that goes wrong in society. Crimes committed by witches are punished much more harshly than those committed by anyone else and this often involves the death penalty for witches. Even if they are registered witches they are limited on the jobs they are allowed to take on and are treated differently by others so it is no wonder most witches keep their abilities secret and turn to a criminal life. A major part of the story is dealing with prejudice in various different forms - everyone against the witches, the witches against the witch hunters and even to a certain degree Glory and Lucas against each other because of their backgrounds. Glory's coven has fallen on hard times and is no longer the powerful and wealthy organisation it once was, they don't have much money and their home isn't exactly a nice place to live. Lucas on the other hand comes from a wealthy background and has always had the best that money can buy for both his education and anything else he could ask for. It's just another of those differences between the witches and the hunters.

I have to admit that the story starts a little slowly as the author spends time building her world and creating the setting for the story. This wasn't something that bothered me though because there was so much I wanted to learn about. The action really picks up in the second half of the book and from that point it becomes impossible to put the book down. I've already mentioned that I would love to read more books in this world and I'll definitely be recommending this to anyone who is looking for a gritty supernatural crime story that is different to the usual YA paranormal romances and dystopian stories the market has been flooded with recently.