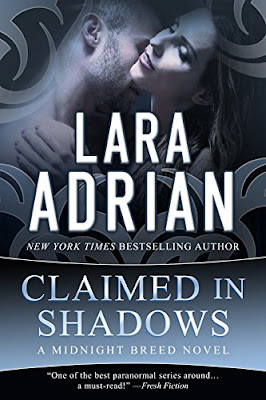 In this pulse-pounding new Midnight Breed vampire romance novel from New York Times and #1 international bestselling author Lara Adrian, passion explodes between a daywalking member of the Order and a fiery female warrior whose shadowy past will test the bonds of both duty and desire.

As the son of a formidable Breed warrior, Aric Chase has been devoted to the Order all his life. With his training completed, all he needs is one successful mission before he can join the fight to destroy the Order’s chief nemesis, Opus Nostrum. His rare ability to daywalk lands Aric an assignment in Montreal, where he learns he’s to be teamed with another new recruit, a beautiful, but tough-as-nails Breedmate named Kaya Laurent.

Independent and driven, Kaya wants nothing more than to become a full-fledged member of the Order. Having grown up in squalor and neglect on the streets of Montreal, she longs for the close-knit family she’s found during her training to be a warrior. Eager to prove herself, she is thrilled to be given the chance at a key operation—even if she must share the mission with an arrogant, far-too-seductive Breed male who’s practically Order royalty.

Their unwanted partnership soon erupts into a desire neither of them can resist. But when Kaya’s past reaches out from the shadows to call her back, she must decide between protecting a dark alliance that could shatter her dreams of joining the team and a truth that could not only forfeit Aric’s faith in her, but bring the enemy right to the Order’s door.

Review:
I'm a huge fan of the Midnight Breed, it's been my favourite PNR series for a long time now and in my opinion Lara Adrian's books just keep getting better and better. The last few novellas have been great but they were about some of the European Order members so this is our first chance to catch up with the core order members in a while. I hadn't actually realised how much I missed them until I started reading this but it was absolutely wonderful to see so many old familiar faces and I'm loving getting to know the next generation too.

The Order has been trying to put a stop to Opus Nostrum for a while now, this terror group wants to wipe the Breed off the face of the planet and now that they have access to UV weapons they're an even more dangerous enemy. Every lead the Order get seems to reach a dead end and Opus Nostrum are always one step ahead so they really need to work fast to get information from their latest suspect. Aric is Sterling and Tavia's son and twin to Carys, his rare daywalker abilities make him the ideal Order member to go undercover at a high class wedding where they might have a chance to interrogate their mark. He has been teamed up with Kaya, a breedmate who has worked hard to prove herself a valuable asset to the Order. Both Aric and Kaya are desperate to become fully fledged members and this assignment is the perfect time to show off their skills. Kaya's unique breedmate ability to read people's mind with a touch, combined with Aric's ability to wipe memories should make it easy to get information on Opus Nostrum without tipping their hand but field jobs hardly ever go exactly as planned and if things go wrong they'll be on their own.

Kaya was such an easy character to like, she has worked so hard to prove herself to the Order and although she's no match for a member of the Breed in physical strength she holds her own pretty well and brings her own set of skills to the party. Kaya had a difficult upbringing and there are things about her past that she's incredibly ashamed of so she's keeping some pretty big secrets because she's terrified of being kicked out if the Order learns the truth. She would never do anything to hurt the Order, they've become the family she always dreamed of, but when you've been hiding something for so long it just gets harder and harder to come clean.

Aric initially comes across as a little self centred and arrogant but once you get to know him you realise he's not a bad guy. His parents have always given him and his sister everything they could ever want but they both had to earn their place in the Order - there are no free rides given no matter who your parents are. In fact, having such important family members have only made him feel like he has even more to prove to live up to their reputation. He is drawn to Kaya immediately but they're both reluctant to start any kind of official relationship, partly because he doesn't plant to stay in Montreal for very long but also because Kaya knows her secrets will come out eventually and she doesn't want to lie to to him. What starts as a fairly antagonistic relationship soon grows into mutual respect and that allows them both to give in to the simmering attraction that was there all along. I loved their romance and found it very easy to root for them as a couple.

We also get the chance to catch up with some of the original couples, Nikolai and Renata are in charge of the Montreal chapter of the Order and they have some exciting things going on in their lives so we see a fair amount of them both along with their adopted daughter Mira and her mate Kellan, but we also get a glimpse of Lucan, Gabrielle, Rio, Dylan, Chase, Tavia, and some of the others. I loved getting to know Rafe (Tess and Dante's son) and really hope we get a book for him but I don't think he's going to be ready for a relationship just yet so we might have to wait a while. This series is just getting better and better, the fight against Opus Nostrum is heating up, the danger to the Breed is increasing and the Order's task to protect Breed and humans alike is just getting more complicated. I love where Lara Adrian is taking these books and and can't wait to get my hands on the next instalment!