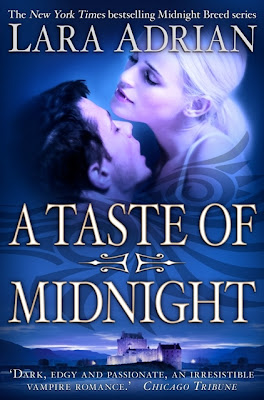 In this spellbinding eBook novella of otherworldly desire, a woman whose destiny was born from a blood kiss discover that second chances do come... even for immortals.

A shimmering holiday gala lights up an ancient castle in the Scottish Highlands, but beautiful widowed Breedmate Danika MacConn feels alone in the crowd. Even, among the friends and festivity of the Darkhaven celebration, she can't forget her lost love, a fallen warrior of the Order. Her brief return to her mate's homeland has become treacherous after rejecting the advances of a dangerous Edinburgh crime boss with a taste for blood sport. As Danika seeks to expose the vampire and his dark trade , she discovers an unexpected ally in his forbidding, enigmatic henchman, Brannoc, a man who exudes heat, danger, and dark menace...

Review:
Danika was pregnant when her breedmate Con was killed while on a mission for the Order.  Unable to face the constant reminders of her lost love she left the Order's compound in Boston to return to her homeland for a quiet life with her son.  While visiting Con's family in Scotland she overhears a dangerous criminal talking about humans being traded for blood sport and is determined to put a stop to it.  She doesn't expect to run into an old friend but as soon as she sees Bran she recognises him as her childhood friend Mal.  She is going to need Mal's help if she wants to put a stop to the criminal activities.

Fans of the Midnight Breed series will remember Danika losing her mate Con in the first book Kiss of Midnight, she has made several minor appearances since then so we have had the chance to see how things have been for her.  I always found it sad that she lost her happily ever after at the same time that the other warriors all started to find theirs so I was really pleased to get to see her find love again.

I'm not going to go into too much detail about the story as this is a short novella and it would be too easy to give spoilers but I really liked the way the romance develops between Danika and Mal.  They have known each other for years and there had been an attraction between them before she met Con so although their romance is fast it was still believable.  What I liked most was the fact that Danika's relationship with Con wasn't dismissed, too often when someone loses their partner in a romance novel it seems like they have to realise that they never really loved them before they can move on with someone else.  This isn't the case here, Danika and Con were together for a long time and she will always have feelings for him but that doesn't mean she can't move forward and be happy again with Mal.

There were a couple of moments when I was shouting at Danika not to be so stupid when she put herself at risk investigating the human slave ring that she uncovers but you can't help but admire her bravery and the fact that she wants to do the right thing.  Mal has his own reasons to be investigating the criminals but he may have to put his hope for revenge on hold if he wants to keep Danika safe.  I really hope we get to see more of both Danika and Mal in the series and I'm also very curious about Thane - I'd love to find out more about him!

A Taste of Midnight is a fabulous novella and a perfect treat for fans of the Midnight Breed series while we're waiting for the release of Darker than Midnight in January.  It would also make a great introduction to anyone who hasn't tried the series yet, the story is stand alone so won't give spoilers for the rest of the series but it will leave you wanting to pick up the other books.  Lara Adrian is one of my favourite authors and this novella doesn't disappoint, if you haven't tried this series yet what are you waiting for?