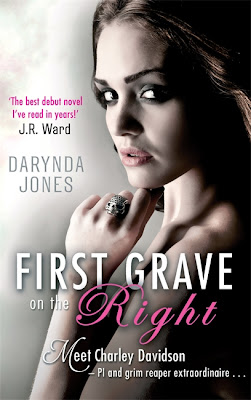 Private investigator Charlotte Davidson was born with three things: looks; a healthy respect for the male anatomy; and the rather odd job title of grim reaper. Since the age of five, she has been helping the departed solve the mysteries of their deaths so they can cross. Thus, when three lawyers from the same law firm are murdered, they come to her to find their killer.

In the meantime, Charley’s dealing with a being more powerful - and definitely sexier - than any spectre she's ever come across before. With the help of a pain-in-the-ass skip tracer, a dead pubescent gangbanger named Angel, and a lifetime supply of sarcasm, Charley sets out to solve the highest profile case of the year and discovers that dodging bullets isn't nearly as dangerous as falling in love.

Review:
Charley is a Grim Reaper and it is up to her to help the dead resolve their outstanding issues so they can move on to the after life. Working for the dead doesn't exactly pay the bills though so she also works as a private investigator, consults for the police and moonlights as a bartender in her spare time. When 3 lawyers from the same firm turn up dead Charley's uncle (a police detective) wants her on the case, but, although she can talk to the dead it isn't always much help if they didn't see the person who killed them. As if investigating a triple homicide wasn't enough Charley is also receiving visits in her dreams from someone (or something) that she has never come across before. Who is the mysterious visitor and what does he want from her?

What I loved most about First Grave on the Right was the humour, I don't think a page went by without me snorting with laughter (or at least grinning to myself like a madwoman). This was mainly down to Charley's sarcastic wit and the banter she had going with the various different side characters, along with the crazy situations she manages to find herself in. Charley was a great character and I'm looking forward to spending more time in her head as I continue reading the series. Although she has supernatural abilities I like the fact that she is still vulnerable, she takes quite a beating throughout the story but always manages to remain strong and won't back down from confrontation.

I liked the side characters we are introduced to and am particularly looking forward to seeing more of uncle Bob, the other PI Garret and her best friend Cookie. I have to admit I didn't really see the attraction to Reyes until very near the end of the book. Although Charley finds him sexy I actually thought he was creepy and couldn't understand why she was so keen on him considering what happened the first time they met.  He did grow on me as we learnt a bit more about him in the last third of the book but overall I still preferred Garret as a potential love interest.

The plot was well paced and there were enough twists to keep me guessing but I did feel that the murder of the lawyers was solved a little too quickly and easily. I'm glad that storyline was resolved though because it meant you did have some closure in the book despite the major cliffhanger when it comes to a different plot thread. Thankfully we don't have too long to wait for the next 2 books in the series! Overall I'm impressed with Darynda Jones' debut and will definitely be picking up the rest of the series. If you like your stories with a lot of snarky banter, a fun selection of characters and a paranormal twist then I'm sure you'll enjoy First Grave on the Right.

Other reviews of this book:
Between Dreams and Reality
If you have reviewed this book on your blog please leave a link to your review in the comments & I'll add the link here.