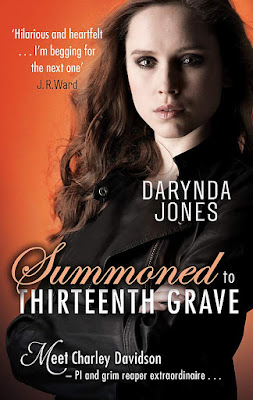 It's lucky number thirteen . . . this is the epic finale for our favourite Grim Reaper and her sinfully sexy son-of-the-devil husband, Reyes.

Charley Davidson, Grim Reaper extraordinaire, is pissed. She's been kicked off the earthly plane for eternity - which is exactly the amount of time it takes to make a person stark, raving mad. But someone's looking out for her, and she's allowed to return after a mere hundred years in exile. Is it too much to hope for that not much has changed? Apparently it is. Bummer.

She's missed her daughter. She's missed Reyes. She's missed Cookie and Garrett and Uncle Bob. But now that she's back on earth, it's time to put to rest burning questions that need answers. What happened to her mother? How did she really die? Who killed her? And are cupcakes or coffee the best medicine for a broken heart? It all comes to a head in an epic showdown between good and evil in this final smart and hilarious novel.

It's Charley's last adventure, and the one thing we know for sure is that it's going to be one wild ride . . .

Review:
If you follow me on Goodreads you'll know I binge read the last five books in this series in less than a week, I've been totally hooked on this series and overall I've really enjoyed it. The trouble with final books in popular series though is that it can be hard for authors to live up to fan's high expectations and I think that was the problem with Summoned to Thirteenth Grave.

This book had all the elements I love from this series, the humour, brilliant side characters, madcap plans to save the world and of course the heat from Charley and Reyes' relationship. There has been a lot of build up for this story and I was happy with a lot of events and reveals in this story. I did feel sad about the way a few of the characters stories ended but if you've read the rest of the series you'll probably know not to expect everyone getting a happily ever after.

I think my two biggest issues with this story were one that the major battle was such a tiny part of the story and over far too quickly and easily and two the way things ended for Charley and Reyes. Yes they kind of get a happy ending but it wasn't the ending I was hoping for for them and Beep and it certainly wasn't the ending they deserved. I know we're gearing up for a spin off series about Beep and her future adventures and I'm 99% sure that I'll be reading those books but it makes me sad to think about how things were left at the end of this story and that makes me a little nervous about how things will move forward from here.

You know a series ended well when it leaves you completely satisfied but in this case it actually left me feeling sad and that's disappointing for a series I've had so much fun reading.