Review: The Curse of the Tenth Grave - Darynda Jones 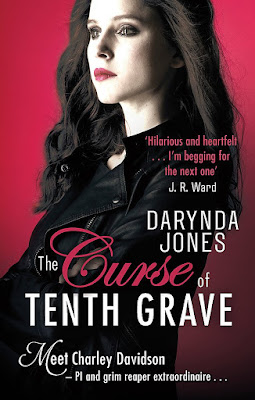 Part-time PI and full-time grim reaper, Charley Davidson has asked a lot of questions throughout her life: Why can I see dead people? Who is the hot supernatural entity following me? How do I get gum out of my sister's hair before she wakes up? But, "How do I trap not one god, but three?" was never among them. Until now. And since those gods are on earth to kill her daughter, she has little choice but to track them down, trap them, and cast them from this dimension.

But one of them stole her heart a very long time ago. Can a god of absolute death and destruction change his omniscient spots, or will his allegiance lie with his brothers?

Those are just some of the questions Charley must answer, and quick. Add to that a homeless girl on the run for her life, a man who's been framed for murdering a woman who is still very much alive, and a pendant made from god glass that has the entire supernatural world in an uproar, Charley has her hands full. If she can manage to take care of the whole world-destroying-gods thing, we're saved. If not, well...

Review:
I'm so happy that this series is completely back on track now that Charley has her memory back. We're back to seeing her work her magic as she simultaneously tries to prove a man is innocent of murder, help a young runaway who believes she has been cursed, deal with a blackmailer, oh and try to figure out a way to stop the gods of Usen and thwart the apocalypse. All of that would be much easier if she wasn't trying to keep secrets from Reyes but he's been keeping her at arm's length ever since they got back from New York and she's got no idea how to bridge the gap between them (thank goodness for Cookie on that one because she comes up with a very creative way to get them talking again!).

There have been some really interesting revelations about both Charley and Reyes in the last couple of books, ones that are going to have a huge impact on the rest of the series so I'm dying to see how everything all comes together now we're in the final stretch. I did find myself frustrated that Charley still doesn't completely trust Reyes, he has been through so much trying to keep her safe and it just takes one small thing, that potentially happened years before they became a couple, for her to doubt his love for her. I could understand why she was keeping certain secrets but I was so relieved when everything was out in the open and that they're now fully back on track relationship wise.

It's also great to see Charley starting to push herself and figure out what her abilities actually are, she's learning all the time and is capable of far more than she ever expected. There was one moment that left me utterly heartbroken for Reyes in this book, he's lost so much already and it really isn't fair for even more to be taken from him. I was far more upset about that than I was about Charley's loss in the previous book but I am extremely worried about a certain revelation about Ubie and hope Charley is able to figure out a way to stop what is coming. Anyway, I'm glad I can dive straight into the next book so I won't have to wait to find out what happens next. I have a feeling I'm going to be binging the last three books very quickly!