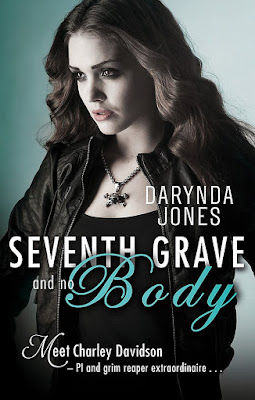 It's lucky number seven for Darynda Jones in her bestselling Charley Davidson series! Following up from Sixth Grave on the Edge, Charley's back and she's ready to reap . . .

Lead me not into temptation.
Follow me instead! I know a shortcut!
--T-shirt

Twelve. Twelve of the deadliest beasts ever forged in the fires of hell have escaped, and they want nothing more than to rip out Charley Davidson's jugular and serve her body to Satan for dinner. So there's that. But Charley has more on her plate than a mob of testy hellhounds. For one thing, her father has disappeared, and as she retraces his last steps she learns he was conducting an investigation of his own, one that has Charley questioning everything she's ever known about him. Add to that an ex-BFF who is haunting her night and day, a rash of suicides that has authorities baffled, and a drop-dead sexy fiancé who has attracted the attentions of a local celebrity, and Charley is not having the best week of her life. But all of that barely scratches the surface of her problems . . .

Recent developments have forced her to become a responsible adult. To conquer such a monumental task, she's decided to start small. Really small. She gets a pet. But how can she save the world against the forces of evil when she can't even keep a goldfish alive?

A tad north of hell, a hop, skip, and a jump past the realm of eternity is a little place called Earth, and Charley Davidson, grim reaper extraordinaire, is determined to do everything in her power to protect it.

Review:
As always there is a lot going on in this book but I think the funniest thing would have to be Charley trying to quit caffeine, I think that girl has coffee running through her veins instead of blood so it's a huge shock to her system when she goes cold turkey! In the grand scheme of things that's the least of her worries though, she's being haunted by her best friend turned enemy, her dad has gone awol, she only has about 8 months to learn how to be a responsible adult, oh and there are twelve deadly, impossible to kill, hellhounds who are out for her blood. Just a normal day for her really.

I love the snark in this series, these books never fail to make me laugh out loud but I've also come to genuinely care about Charley and her motley crew of sidekicks. It was easy to fall for Reyes and his mysterious bad boy persona but Cookie, Ubie, Garrett, Angel & Rocket are all firm favourites and I really like new addition Osh too. As much as I love seeing Charley working as a PI and solving cases I'm really liking the way we're getting to learn more about her grim reaper abilities and that the supernatural is playing a bigger role in the stories.

There was a lot to love about this book and one particular scene at the end was something I'd waited a long time for and was very happy about. Unfortunately it was followed by something that was absolutely heartbreaking for Charley and it's going to be hard watching her deal with the fallout from that in the next book. I'm thoroughly enjoying this series though and can't wait to continue reading.