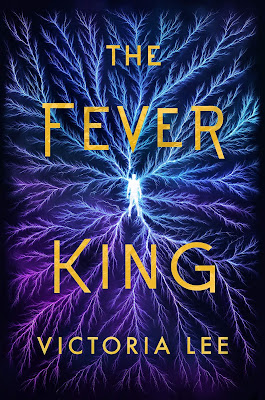 In the former United States, sixteen-year-old Noam Álvaro wakes up in a hospital bed, the sole survivor of the viral magic that killed his family and made him a technopath. His ability to control technology attracts the attention of the minister of defense and thrusts him into the magical elite of the nation of Carolinia.

The son of undocumented immigrants, Noam has spent his life fighting for the rights of refugees fleeing magical outbreaks—refugees Carolinia routinely deports with vicious efficiency. Sensing a way to make change, Noam accepts the minister’s offer to teach him the science behind his magic, secretly planning to use it against the government. But then he meets the minister’s son—cruel, dangerous, and achingly beautiful—and the way forward becomes less clear.

Caught between his purpose and his heart, Noam must decide who he can trust and how far he’s willing to go in pursuit of the greater good.

Review:
Set in a distant future after a worldwide plague wiped out a large chunk of the population and you'll find America has split into several different countries. Noam is an undocumented immigrant living in Carolinia who spends his time fighting against the government to try and get better rights for refugees. With regular outbreaks of the magical plague outside the boarders Carolinia is determined to keep people out and conditions in the refugee camps are just getting worse and worse. When the plague hits Noam's camp he is one of the only survivors and his newly gained, and incredibly rare, technomancer magical talent makes him a valuable tool that the government wants to use. Noam is determined to use his ability against the government but first he needs their help to learn how to use his ability.

I'll admit this was a total cover buy, I hadn't heard of the series before but when it popped up in the first reads program that cover and the blurb had me totally sold. I had very high hopes going in so I really hate to say this but I did end up feeling a little disappointed. There were a lot of really interesting ideas here but I don't think they were executed particularly well, the world building came in the form of sporadic info dumps that were boring to read and hard to understand. Even by the end of the book I didn't feel like I had a strong grasp of what happened to splinter America or even how the much of the world had survived the magical plague. I just have no idea how many countries are left or what kind of state they are in.

One bonus I'll give the story is that it does have good representation, the main character is mixed race and bisexual, there is a gay romance and it also raises interesting talking points about refugees and the way they are often demonised for doing nothing more than trying to survive. I just wish the world building had been better and the plot had been more cohesive. I also felt that the major plot twists were too well telegraphed because I saw them coming from a mile away. I liked the characters well enough but I don't feel particularly invested in their story and even though it ended on a pretty big cliffhanger I currently have very little interest in picking up the sequel. This is Victoria Lee's debut and I should probably give it some leeway because of that so that's why it gets 3 stars rather than 2 but unless I see some really glowing reviews for the next book I doubt I'll be continuing the series.