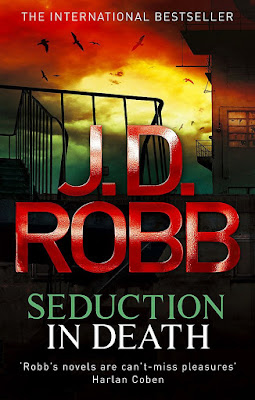 She was twenty-three and already in love. She was certain he'd be handsome. She would be dead before midnight.

Bryna Bankhead carefully dressed for her date with the wonderful Dante, a man she's only ever spoken to online. By the end of the night, rose petals are scattered, poetry has been quoted - and Bryna has been murdered.

What starts as a mistake, becomes a terrifying game, as two young men pursue their poisonous obsession with an illegal drug and an insatiable desire. As more girls are taken, homicide lieutenant Eve Dallas and her roguish husband Roarke must think fast and act even faster.

And then Eve discovers the secret to their destructive past and a deadly trap is set . . .

Review:
It starts with two young men setting up a game where they earn points based on the outcome of their latest dates. It's bad enough that they're using date rape drugs to make their victims "willing" and compliant but when one of them accidentally crosses the line into murder the game takes a deadly new turn. It's up to Eve to track down these killers but if she doesn't work fast she's going to have to have more innocent victims on her hands.

It says a lot when you're thirteen books into a series and still loving every minute of it. I was really nervous starting the In Death books, it's pretty intimidating when you know that there are already upwards of 40 books published, but now I'm actually thrilled that I still have so many unread books ahead of me. I just can't seem to get enough of these characters! I love Eve, she's both tough as nails and deeply vulnerable and as she gradually seems to be remembering more about her past I have a feeling we're only beginning to touch on her childhood trauma. Roarke is fabulous too and definitely one of my favourite book boyfriends right now. He understands Eve in a way that few others do and he's been a constant source of support since they met, their relationship has had it's rocky moments but they're in a pretty good place right now and their bond just gets stronger with each book.

This is a series about death and murder so of course it has it's dark moments but there is also plenty of humour too thanks to characters like Peabody and McNab. Peabody is a brilliant aide to Eve but she's a bit dense when it comes to her personal relationships so it's been really interesting to see things with her and McNab go totally pear shaped. We do get some progress on that front in this book but they're both pretty stubborn and mule headed so who knows how long they'll be on speaking terms for this time. I guess I'll just have to dive straight into the next book to find out!