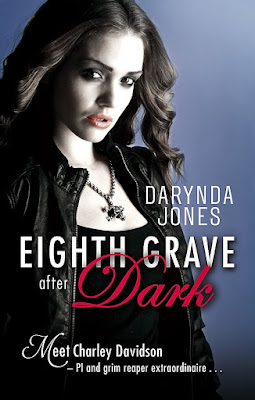 Charley Davidson has enough to be getting on with. She is, after all, incredibly pregnant and feeling like she could pop at any moment. But, just her luck, twelve deadly beasts from hell have chosen this time to escape, and they've made Charley their target. She takes refuge at the only place they can't get to her: the grounds of an abandoned convent. Before long, Charley also has a new case to hold her attention: the decades-old murder of a newly-vowed nun she keeps seeing in the shadows of the convent.

Add to that the still unsolved murder of her father, the strange behavior of her husband, and Charley's tendency to attract the, shall we say, undead, and she has her hands full . . . but also tied. While the angry hellhounds can't traverse the consecrated soil, they lurk beyond its borders like evil sentries, so Charley has been forbidden from leaving the sacred grounds and is powerless to get the answers she wants.

Luckily, she has her loyal team with her, and they're a scrappy bunch. They scour the prophesies, searching for clues on the Twelve, and their presence is comforting - it's almost as though they've all been drawn to her as part of a bigger picture . . . But the good feelings don't last for long because Charley is about to get the surprise of her crazy, mixed-up, supernatural life.

Review:
I'd been flying through this series and enjoying every minute of it but then I hit book eight and just kind of stalled. It pains me to say it but I just didn't feel the magic with this one. To be fair it's very hard to write an exciting book when your narrator is not only 8 months pregnant but also trapped in a convent to avoid being eaten by hellhounds. Charley has spent months stuck in one location and as much as her friends and family drop by to keep her company it's just really not the same as seeing her out and about kicking butt and taking names.

I was a bit wary when we found out Charley was pregnant, to be honest I prefer to avoid kids in UF books unless they're either old enough to be interesting characters in their own right, or come at the end of the series to signify the the fact that the main characters are finally getting to settle down and have their well earned happily ever after. I mean how is Charley supposed to deal with a potential apocalypse if she's carting around a newborn? Well that issue was kind of resolved but I'm not even sure I like the way that side of things was handled either. It just seems a bit pointless to bring a kid into things and then do what happened in this book.

So this book wasn't as full of action as the previous stories and if I'm honest the first half was kind of boring. I was frustrated with Charley for going against Reyes' wishes and trying to track down his birth parents when he specifically asked her not to but I think I was even more angry at the way that entire plot thread ended and I wanted to smack some sense into the pair of them for keeping such ridiculously stupid secrets from each other. I was also really irritated by Gemma and the way she kept trying to force Charley to accept Denise, the stepmother from hell, back into her life. Denise has been horrible to Charley throughout the entire series, was a monster to her when she was a child and now expects to be allowed to play grandmother of the year. No chance and the fact Gemma was taking Denise's side made me really mad. I have to admit I loved the way things played out with Denise though, I think that probably makes me a terrible person but I don't care because the whole thing was hilarious!

The story did improve towards the end, we finally start getting some answers about Charley's powers and why she's been given them. I still have a lot of questions and some things confused me a bit but we're getting answers and that's great. I'm still not sure how I feel about the twist at the end though, in some ways I think it'll make things really interesting and will hopefully send the series back in the right direction action and plot wise but in others it felt like a bit of a cop out. I guess I'll have to see how it plays out in book nine before I make my mind up. Even though this wasn't my favourite book I'm still hooked enough that I want to know how things play out so I'm definitely going to be continuing the series.