Review: The Dirt on the Ninth Grave - Darynda Jones 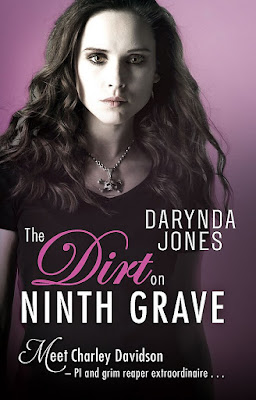 In a small village in New York Charley Davidson is living as Jane Doe, a girl with no memory of who she is or where she came from. So when she is working at a diner and slowly begins to realize she can see dead people, she's more than a little taken aback. Stranger still are the people entering her life. They seem to know things about her. Things they hide with lies and half-truths. Soon, she senses something far darker. A force that wants to cause her harm, she is sure of it. Her saving grace comes in the form of a new friend she feels she can confide in and the fry cook, a devastatingly handsome man whose smile is breathtaking and touch is scalding. He stays close, and she almost feels safe with him around.

But no one can outrun their past, and the more lies that swirl around her-even from her new and trusted friends-the more disoriented she becomes, until she is confronted by a man who claims to have been sent to kill her. Sent by the darkest force in the universe. A force that absolutely will not stop until she is dead. Thankfully, she has a Rottweiler. But that doesn't help in her quest to find her identity and recover what she's lost. That will take all her courage and a touch of the power she feels flowing like electricity through her veins. She almost feels sorry for him. The devil in blue jeans. The disarming fry cook who lies with every breath he takes. She will get to the bottom of what he knows if it kills her. Or him. Either way.

Review:
I'm a huge fan of this series but I have to admit after the disappointment of book eight I put off starting this one for quite a while. I just wasn't sure what to expect from a Charley with no memory and was worried that this would be another filler book that didn't really add much to the overall story arc. In a way I was right about that, nothing huge happens in this book and I don't think you'd really miss much by skipping it. However, this was FAR better than book eight, it's back to being more of an action oriented story as Charley goes out of her way to try and solve a mystery and save people she's only just met. It feels like this series is starting to get back on track and I'm back to being excited to carry on reading it

Charley spends nearly the whole book in a strange kind of limbo wondering who she is and where she's from, more importantly she wonders why nobody has come looking for her. What she doesn't realise is that her closest friends and family have all inserted themselves into her new life so all of they're still with her even if she doesn't recognise them. I have to say I didn't really buy the reasoning of keeping their identities hidden from her, Charley is so distraught at not knowing who she is and she thinks she must have been a terrible person because nobody is looking for her and they could have saved her a lot of that pain by being honest with her.

It was interesting to see that even without knowing her history her personality hasn't changed. She still cares about the underdogs and wants to help people. Watching her try to figure out why she could see dead people everywhere she went was quite hilarious, particularly when she had a run in with a ghost horse! I also loved getting back that intense sexual tension between her and Reyes. Charley doesn't remember him but she's still totally attracted to him and doesn't understand why he goes from practically eating her with his eyes to acting like he hates her. Reyes on the other hand is dreadfully angry at Charley for leaving him, he's angry about the situation they're in and he's hurt that she could forget him but he still loves her and is desperately hoping she'll come back to him. It makes for some wonderful will they / won't they moments between them that I couldn't get enough of.

I'm very glad that Charley eventually gets her memory back, I don't think I could read another book of her second guessing herself and everyone around her because she knows they're hiding things but doesn't know what or why. I'm hoping that from here onwards we're going to get back to the series I love and I can't wait to see how Charley and Reyes' story ends.