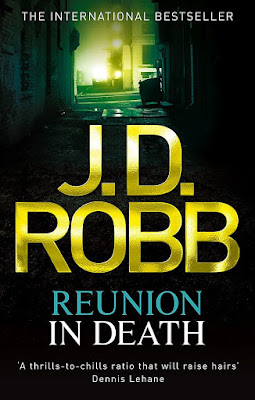 Murder was work. Some went about the job devotedly, others carelessly. And for some, murder was a labour of love.

On the day of his sixtieth birthday, Walter C. Pettibone is blissfully unaware of his impending death. His final act in life is to accept a glass of champagne by a woman with startling green eyes. A big mistake.

Homicide lieutenant Eve Dallas knows she faces a deadly foe - one with a frightening vendetta. And as the chase draws Eve dangerously close to her own dark past, her focus slips.

But then Eve's billionaire husband's name is put on Julianna's fatal list - and Eve ups her game. Luring Julianna into a dangerous trap which puts everyone at risk, Eve finds herself fighting for more than justice.

Review:
I've totally fallen in love with this series and lately I just can't seem to get enough of Eve and Roarke. Reunion in Death has a lot of emotional upheaval for Eve, as always she has a killer to track down but in this book she's also forced to face more of her past when the case takes her to Dallas to interview a potential witness. I always find it really painful seeing Eve relive her childhood traumas and this book was even more heart wrenching than the others but it's good to see her learning to rely on Roarke for support and even turn to Dr Mira for extra help when she needs it. She'll never get over what happened but hopefully she will eventually find better coping mechanisms and stop her regularly recurring nightmares.

While this book was quite dark in places it also had plenty of the humour fans of the series already know to expect. Eve has decided Peabody is ready for more responsibility and she gives her a cold case to work on her own. I love seeing how far Peabody has come under Eve's watchful eye and seeing Eve as a teacher shows us a different side to her character. We also have a visit from Peabody's parents which I have to admit was a bit on the weird side, Peabody's mother somehow manages to manipulate Eve into inviting them to dinner and then she manages to get Roarke to invite them both to stay which was surprising to say the least. I'm not sure why they'd choose to spend their time staying with Eve and Roarke not with their daughter - well the mansion, swimming pool and incredible food might have something to do with it! - but it was still odd. There were some interesting conversations while they visited but I didn't like the way they ended up making Eve feel uncomfortable in her own home though.

I found the murderer in this book quite fascinating though, it's not often we go into a book in this series already knowing who the killer is but that's exactly what we have here. Eve has already caught this murderer once but she's now been released on parole and immediately gone back to her old ways. What's interesting here is seeing Eve work out how to capture someone who has spent years planning her crimes and who hasn't left them many clues to work with. It was also interesting to come across a female serial killer, not something we see often in real life or fiction. Julianna was a worthy opponent for Eve and their battle of wits was extremely entertaining.

It's not often that I get 14 books into a series and still find myself desperately wanting more so J.D. Robb is doing a wonderful job on that front and I have a feeling it's not actually going to take me too long to catch up on the remaining 30 or so books that have already been published!