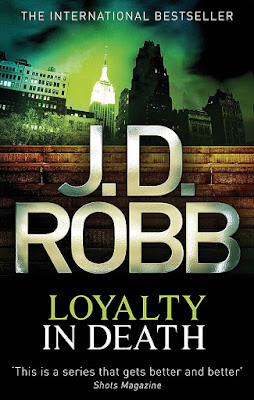 Eve Dallas has been chosen by a deadly revolutionary group, Cassandra, as their one true adversary. While investigating the seemingly simple case of a jealous lover killing her partner, she receives a disk from Cassandra, telling her to expect a demonstration of their power. Arriving just in time to see one of her billionaire husband Roarke's empty properties blown up, the link continues as more of Roarke's city landmarks are destroyed, testing Eve and her team to the limit and costing more and more lives.

Discovering that Cassandra is linked to a previous group, responsible for blowing up the Pentagon several years ago, things turn increasingly sinister as Eve realises that the murdered man and his family are implicated, and she races to break down the web of deceit and destruction before the city falls.

Review:
Loyalty in Death sees Eve face her most dangerous enemy yet, a terrorist organisation known as Cassandra that is targeting public and highly populated areas with bombs and creating an ever increasing body count. The organisation claims to be a revolutionary group that aims to improve society but the way they're willing to murder innocent people so viciously proves they're out to do as much damage as possible and Eve is determined to stop them.

As much as I enjoyed Eve's hunt for the terrorist group as well as her investigation into what first seems to be a fairly simple murder committed by a jealous lover I think what I loved most about this book was the side characters. I've always loved characters like Peabody and McNab but we really see them shine in this book and I have to confess to cheering at certain developments in their personal lives. I also really loved the chance to meet Peabody's brother Zeke who comes to town for a job and to catch up with his sister. It was interesting to learn more about Peabody's family and I really liked the bond she shared with Zeke, it gave a bit more insight into what Peabody must have been like when she first arrived in New York but I don't think she can ever have been quite so naive as her brother or she wouldn't have survived her first week!

We get to see plenty of Roarke and Eve too which is always a highlight of these books, they have a few rocky moments here but Eve is getting much better at understanding what Roarke needs from her and she's much more willing to try and express herself than she was in the beginning. She still finds it hard to open up and things from her past understandably weigh heavily on her but it's been good to see how much progress she's made already.

I think this story was one of the most tense ones in the series so far, the stakes are incredibly high and the sense of danger was really enhanced so I was on the edge of my seat for much of the story but particularly the ending. I'm so glad I've decided to focus on catching up with this series because I really can understand now why all my friends have been raving about it for years!