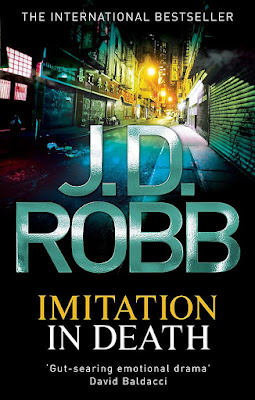 As Lieutenant Eve Dallas stood over what had once been a woman, she wondered when she would see worse than this.

Jack the Ripper, the Boston Strangler, Ted Bundy. The worst murderers in history and a new madman's inspiration. In the lost hours of the night a man in a top hat and swirling cloak leaves horror in his wake and a note to Eve Dallas, signed simply: Jack.

More murders follow and Eve quickly realises the killer's deadly game of imitation. But facing this calm and menacing presence, with a trail running through London, Paris and LA, Eve struggles to keep her focus.

At a time when legend collides with brutal reality, Eve needs all her wits about her . . .

Review:
Imitation in Death sees Eve up against a serial killer with a difference. Instead of finding his own preferred methodology this killer is imitating his favourite serial killers from throughout history, starting with Jack the Ripper. Every murder is different and the only link between the crimes is that all of the victims are women. Eve knows she's dealing with someone who loves the his work and who will keep killing until she stops him but she doesn't have many clues to work from.

17 books in and I'm still totally hooked! The murder mystery was great, there are some fabulous moments between Roarke and Eve (I laughed out loud when he decided to buy a top of the line grill so they could host a barbecue), and Peabody is just a little bit stressed about her upcoming Detective's exam. I'm running out of ways to say how much I love all of these characters so I'll just keep this brief and say if you've let the size of this series put you off starting it (like I have for so many years!) then don't put it off any longer. There is a reason fans are still going crazy for it over 40 books in and I can't wait to read the rest of them.