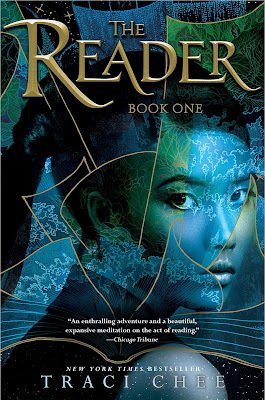 A stunning debut set in a world where reading is unheard-of, perfect for fans of Inkheart and Shadow and Bone

Sefia knows what it means to survive. After her father is brutally murdered, she flees into the wilderness with her aunt Nin, who teaches her to hunt, track, and steal. But when Nin is kidnapped, leaving Sefia completely alone, none of her survival skills can help her discover where Nin’s been taken, or if she’s even alive. The only clue to both her aunt’s disappearance and her father’s murder is the odd rectangular object her father left behind, an object she comes to realize is a book—a marvelous item unheard of in her otherwise illiterate society. With the help of this book, and the aid of a mysterious stranger with dark secrets of his own, Sefia sets out to rescue her aunt and find out what really happened the day her father was killed—and punish the people responsible.

With overlapping stories of swashbuckling pirates and merciless assassins, The Reader is a brilliantly told adventure from an extraordinary new talent.

The Sea of Ink and Gold Trilogy:
The Reader
The Speaker
The Storyteller

Review:
The Reader is such a fabulous and clever story that it's almost hard to believe it's Traci Chee's debut novel. It's complex, multi-layered and the writing is beautiful enough to capture you from the first page. Imagine a world where books are really magical, where the words written in them can be so dangerous that they have actually been banned. In fact, books were outlawed so long ago that most people don't even know what reading or writing is, let alone how to actually do them! It's such a fascinating and horrifying premise to a bookworm like me that I just had to find out how it all came about.

Now let's talk about our main character Sefia, she's someone who has survived some of the darkest things imaginable. She lost both her parents when she was young, barely escaping with her life when her father was tortured and murdered, and since then has only had her aunt Nin to rely on. The two are very close but Sefia has always known that dangerous people are hunting them so they have lived their lives on the fringes, always on the move and living hand to mouth. When those enemies finally catch them Nin sacrifices herself so that Sefia can get away and Sefia is determined to do whatever it takes to rescue her aunt from her captors.

The only clue Sefia has is a mysterious item that her parents always kept hidden and that Nin warned her not to touch. It turns out that item is a book and while Sefia is all alone she slowly teaches herself how to read it. Inside she finds a whole new universe opening up to her, one that's full of stories that totally change the way she looks at the world, as well as giving her some strange new magical abilities. The question is whether she can use those abilities to help rescue her aunt or whether her enemies will catch up with her first.

That's only the beginning of Sefia's adventures and I really don't want to say anything more about this story because I want you to be able to enjoy seeing everything unfold for yourself. There are several other narrators that I've not even touched upon but I'll just tell you that while each plot thread may seem totally unrelated in the beginning they are all very cleverly winding through and around each other to create a vast and complex tapestry that you'll only really be able to see at the end. There are so many characters I want to spend more time with as the series continues and I can't wait to see what happens next. The Reader really is a fantastic debut and I'm just glad that the rest of the trilogy is already available because I plan to binge read the next two books as soon as possible!