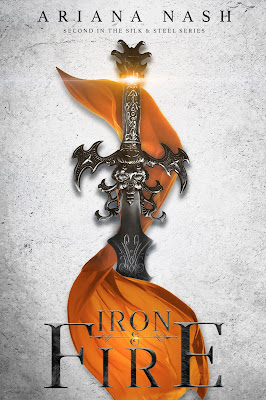 Alliances are forged and broken, friendships shattered, and despite the odds stacked against them, two hearts collide in this explosive sequel to Silk & Steel.

From his mother’s cage to a human one, but Lysander’s captors are the least of his concerns. Rumors of a monstrous bronze dragon ripple through human camps, a dragon tearing great holes in the world as though searching for something… or someone.

It’s just a matter of time before the bronze chief, Dokul, finds Lysander and makes good on his promises. And should he find him, Lysander knows Dokul will not be merciful.

Amidst the greatest of elven victories, Eroan failed. Failed his people, failed himself, and failed the dragon who saved him. But he will not falter. The dragonkin are in disarray, there will never be a greater opportunity to strike. Eroan Ilanea will not fail his people again.

But when rumors of the dragon prince’s survival reach him, he must choose: Fight for his people or fight for the prince who nobody thought to save?

Review:
Iron & Fire picks up the story several weeks from the end of Silk & Steel, Lysander has spent that time as a prisoner and while the humans haven't technically tortured him being stuck inside a cage hasn't been much fun. What's worse is the rumours of a giant bronze dragon that has been seen all along the coast, Lysander knows that Dokul is searching for him and he dreads what will happen when he does. Meanwhile, Eroan has returned to his people and is helping to spread the word about weapons that can be used to actually kill dragons, he's trying to convince the elves to work alongside humans so that they have a chance of destroying their enemy once and for all but after the last betrayal the elves are wary.

Eroan hasn't been able to forgive himself for Lysander's death so when he realises that the dragon may in fact be a prisoner he has a difficult decision to make. Should he risk it all to save a dragon when his entire life has been devoted to destroying as many of them as possible? It should be an obvious choice but without Lysander he wouldn't have survived his own captivity and now is his chance to return the favour. The only question is how many enemies will he make amongst his own people by doing what he knows is the right thing.

If you read the first book then you'll already know that this is a dark series, I'm going to warn you now that this book wasn't any easier to read. In fact certain scenes were incredibly difficult to get through so please take this warning seriously. There are rape scenes, both MM and MF, and I think that's important to know if it could be triggering for you. Having said that, no matter how painful parts of this book were to read it was still an excellent instalment to the series. It's not light and fluffy, instead it's gritty and raw but it also has a lot of heart and characters you'll find it easy to root for.

I love Lysander, for someone who has suffered so much he still has a huge amount of compassion for others. He takes some serious knocks in this book but in spite of that he tries to do the right thing. There were times when I really wanted to smack some sense into Eroan, I was angry with him for leaving Lysander to suffer for so long but at the same time I could understand that he was trying to do what was right for his people. Both of them have such complex histories and even when they make questionable decisions it's easy to see why they think and act the way they do. I so desperately want them both to find happiness but I have a feeling they're going to have to face a lot more hardship along the way.

Iron & Fire is a book that tore my heart out but that just proves how invested I am in these characters and this world and I can't wait to get my hands on the next book to see what happens next.