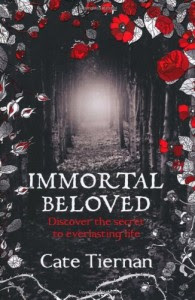 After some of the events I've witnessed I felt like I was a shell with nothing alive left in me.

I hadn't been going around killing people, but people were hurt - the memories just kept trickling in like rivulets of fresh acid dripping into my brain until I wanted to scream.  It was in my blood, I knew.

I had inherited it, along with my immortality and my back eyes.

Review:
At the beginning of Immortal Beloved Nastasya (or Nasty to her friends) was the kind of character I hate to read about, she is one of a group of rich friends who spends her time drinking, partying and having fun at the expense of others.  For the first couple of pages I wasn't even sure if I would finish reading the whole book but it quickly became clear how unhappy she was with her life and that she wanted to change and I soon became hooked.  Nastasya has lived for a very long time, she has both seen and done terrible things and over the years she has become indifferent to the feelings of others.  To block out her own memories she has taken to drinking herself into oblivion but after a horrific incident on a night out with her friends she begins to realise that she doesn't want her life to be like this anymore.

She runs from her friends, wanting to disappear and find a better life for herself.  Checking into the equivalent of Immortal rehab comes as quite a shock to her, for a long time she has avoided mundane tasks - they give her too much time to think - so working on a farm isn't what she is used to.  I really enjoyed watching her character develop throughout the story she changes from a party girl to someone who is able to appreciate the small pleasures in life.  I also loved the snippets from her past and the way her secrets are gradually revealed.  The inhabitants of River's Edge (the farm) were interesting and I'm looking forward to finding out more about them all.  I did struggle to understand Nastasya's fascination with Reyn for the majority of the book though, apart from the fact he was good looking we learnt hardly anything about him until towards the end and they rarely even spoke to each other.  I'm definitely more interested in him now that we know a bit more about his history though and will enjoy getting to know him better as the series progresses.

The story does feel quite slow to begin with, more character based than action packed but I mean that in a good way and it was an addictive read.  Immortal Beloved touches on themes of love, loss and grief but also shows how important it is to be true to yourself and not follow the crowd just because it's the easy option.  As the first book in a trilogy you are left with a lot of questions at the end of the book so I'm glad I don't have to wait long to read Darkness Falls and find out what happens next.  Going from the title I was expecting a fairly standard YA urban fantasy about vampires so it was refreshing to find something so different.  If you're looking for a YA paranormal that stands out from the crowd and doesn't have a fang in sight you should definitely give Immortal Beloved a try.

Other Reviews:
Much Loved Books
If you have reviewed this book on your blog please leave a link to your review in the comments & I'll add the link here.