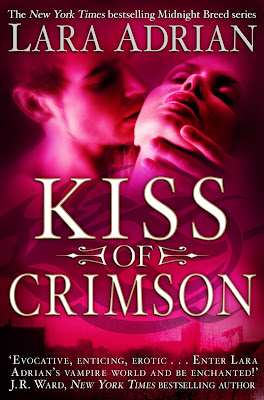 Bonded by blood and dark secrets, they enter a place of danger and infinite pleasure....

He comes to her more dead than alive, a towering black-clad stranger riddled with bullets and rapidly losing blood.  As she struggles to save him, veterinarian Tess Culver is unaware that the man calling himself Dante is no man at all, but one of the Breed, vampire warriors engaged in a desperate battle.  In a single erotically charged moment Tess is plunged into his world - a shifting, shadowed place where bands of Rogue vampires stalk the night, cutting a swath of terror.

Haunted by visions of a dark future, Dante lives and fights like there is no tomorrow.  Tess is a complication he does not need - nut now, with his brethren under attack, he must shield Tess from a growing threat that includes Dante himself.  For with one reckless, irresistible kiss, she has become an inextricable part of his underworld realm...and his touch awakens her to hidden gifts, desires, and hungers she never knew she possessed.  Bonded by blood, Dante and Tess must work together to thwart deadly enemies, even as they discover a passion that transcends the boundaries of life itself....

Review:
Kiss of Crimson is the second book in Lara Adrian's Midnight Breed series.  Although I'll try not to give anything away that happened in the first book if you are new to the series I'd recommend you click here to read my review for the first book Kiss of Midnight before reading any further.  Each book in the series can be read as an individual story as the main plotline is based around one of the Breed warriors & one Breedmate.  However, there is an ongoing background story and the main characters from each book do make appearances throughout the series so I would strongly recommend that you read the books in order to get the most out of them.

I already gave a brief overview of the Midnight Breed in my previous review so I'm not going to go into much background detail here.  In this book the war between the Breed & the Rogues is escalating, in part due to a new drug called Crimson that is doing the rounds in the clubs and causing Bloodlust in young Breed males turning them Rogue.  The warriors are tasked with trying to find out where the drug is coming from & stopping it's production.  We get to meet Agent Sterling Chase from the Boston Darkhaven who arrives to help with the investigation & is a very interesting character.  I'm looking forward to seeing his character develop in future books.

When Dante is badly injured in a fight with Rogues he is unable to make it back to the compound & ends up at Tess' veterinary clinic.  If he is to survive his injuries he is in desperate need of blood & Tess is the only person on hand to provide what he needs.  He takes her blood before realising that she is a Breedmate & that he has inadvertently half completed a Blood Bond with her.

Dante is one of my favorite Breed warriors.  He is tormented with visions of his own death which has given him no hope for his future.  He tries to fight his strong feelings for Tess but is continually drawn to her & finds this hard to deal with.  Tess has her own dark secrets to hide & finds it very hard to trust anyone so she finds it hard to understand why she is so attracted to Dante.  There are some really great scenes between them & Dante is hot, hot, hot!  They are both determined to fight the Blood Bond (although Tess doesn't even know that this is in place which makes her feelings even more confused) but will they be able to overcome their issues and find a way to be together?

Alongside the romance between Dante & Tess and the war against the Rogues the scene is set for the next book which tells Tegan's story.  He is another Gen One Breed like Lucan & his book promises to be a good one.  The action in Kiss of Crimson is fast paced which makes it easy to keep the pages turning. I find all of the books very hard to put down when I get started.  This story builds nicely on from the 1st book and makes you want to keep reading the series.