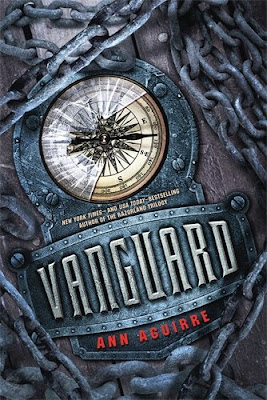 The voyage of a lifetime awaits.

Since the war ended, Tegan has dreamed of an epic journey, so when she has the opportunity to sign on as ship’s doctor, she can’t wait. It’s past time to chart her course. Millie Faraday, the kindest girl in the free territories, also yearns to outrun her reputation, and warrior-poet James Morrow would follow Tegan to the ends of the earth.

Their company seems set, but fate brings one more to their number. Tegan will battle incredible odds while aiding Szarok, the Uroch vanguard, who has ventured forth to save his people. Szarok is strange and beautiful, like a flower that blooms only in the dark. She shouldn’t allow him close, as such a relationship is both alien and forbidden. But through stormy seas and strange lands, she will become stronger than she ever knew.

Adventures almost never go according to plan, and when Tegan understands what her heart truly wants, it might change her life forever…

Review:
I was really looking forward to reading Tegan's story but I have to admit I was a little wary when I realised it was going to involve a romance between her and the Uroch vanguard Szarok. I'd been rooting for her and James in the earlier books so I was disappointed to see my ship sinking and to be honest I just couldn't see how I'd be able to get on board with a relationship between a human and one of the uroch, it wasn't something I could quite get my head around! I'm very happy to say that Ann Aguirre totally proved me wrong with Vanguard though and I thoroughly enjoyed this book.

Tegan has saw the worst of what humanity has to offer before she was rescued by Deuce and Fade and although her life has changed dramatically since then and her training as a healer has brought her a great amount of respect she's still wary of people in general and men in particular which is completely understandable. She has a great sense of right and wrong though and in spite of everything she's been through she's incredibly compassionate and caring so it shouldn't be much of a surprise when she automatically connects with Szarok after seeing him being ostracised by the people around her. She understands exactly what the uroch risked when they chose to help humanity and she's angry for the way he is treated now that they are asking for help in return. I don't want to go into too much detail but I loved the slow build of their relationship, the way they gradually let their guards down around each other and learn to trust and the slowly growing friendship that blossoms into a very unlikely attraction. They were so sweet together and it didn't take long for me to start rooting for the pair of them.

I also found it incredibly interesting to see how the world was being put back together after the big battle. We get a chance to catch up with a lot of the previous characters which was nice but it was definitely Tegan and Szarok who were the stars of this book. James has a story of his own which I enjoyed but I have to admit I wasn't as invested what was happening with him even though I liked Millie too. This was a fitting end to the series, it tied up a lot of loose ends and gave us a good idea about what life would be like for humanity and the uroch in the future and I'm very glad we got this chance to revisit the world Ann Aguirre has created.

Source: I was given a signed copy from the author.