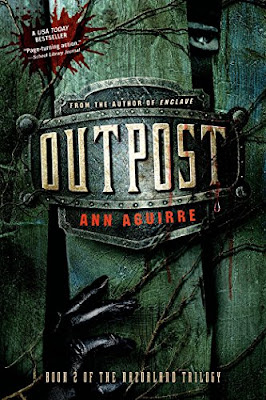 Down below, she was considered an adult. Now, topside in a town called Salvation, she’s a brat in need of training in the eyes of the townsfolk. She doesn't fit in with the other girls: Deuce only knows how to fight.

To make matters worse, her Hunter partner, Fade, keeps Deuce at a distance. Her feelings for Fade haven’t changed, but he seems not to want her around anymore. Confused and lonely, she starts looking for a way out.

Deuce signs up to serve in the summer patrols—those who make sure the planters can work the fields without danger. It should be routine, but things have been changing on the surface, just as they did below ground. The Freaks have grown smarter. They’re watching. Waiting. Planning. The monsters don’t intend to let Salvation survive, and it may take a girl like Deuce to turn back the tide.

Review:
Everything is different now that Deuce and the others have arrived at Salvation and she's finding it hard to fit in. She's not comfortable with the way they expect girls to dress nicely and learn useful skills like cooking and sewing and the town just don't know what to make of her tomboyish ways. It's also hard being treated like a child and expected to go to school when she's spent so many years fending for herself and helping to protect others in her role as a hunter. Things start to look up when she proves she has the skills to be one of the town guards and is given a job helping to protect the farmers during the summer harvest but as the Freaks continue to get smarter and prove a far greater danger than ever before she's going to have her work cut out for her.

I'm so glad I've finally made a start on this series, it's one I'm really enjoying and I loved seeing how much Deuce grew as a character in this book. What I love about her is that she accepts that she doesn't know everything and she's willing to ask questions and learn what she needs to. She also knows where her strengths are though and she refuses to let anyone put her in a box just because of her gender. I had to admire her for standing up for what she wanted when it would have been so much easier to go along with the town folk's expectations for her. I felt sorry for her as she struggled to find her place though, Tegan found it so much easier to fit in and preferred to spend time with new friends because Deuce and the others reminded her of a difficult time, Fade is still jealous and is also keeping his distance so the only one it seems like she can really rely on is Stalker.

I'll admit I was worried in the first book that it might turn into a dreaded love triangle but I'm convinced now it's not going to happen. Stalker is obviously interested in Deuce but it's very clear she only has feelings for Fade and I can't imagine that changing any time soon. I wasn't at all keen on Stalker's character in the first book - let's face it he's done some horrific and pretty unforgivable things! - but he actually really grew on me in this book. At least he's willing to admit the things he did wrong and he wants to make amends for them and who knows how we would have acted if we'd been born in his shoes. I think one of the things I like most about Deuce is how self aware she is, she recognises that she acts in certain ways because of the way she was raised but she wants to learn and do better and she recognises a similar quality in Stalker. As much as Stalker has grown on me I'm still 100% on team Fade though! I was irritated with him for pushing Deuce away at the beginning of Outpost but he's been through a lot and his insecurities were showing. When it comes down to it he always has Deuce's back when she needs him the most and I love seeing them fight alongside each other.

This series is quite brutal and it doesn't shy away from the violence of post-apocalyptic life which makes it feel very believable. There is always plenty of action and I've flown through both books so far so this series certainly didn't suffer with second book syndrome. Ann Aguirre has kept the pacing tight and it's clear she has a solid plan on where the series is going from here. After that ending I'm very interested to see what happens to all the characters next and I'm very glad that I don't have to wait a year for the next book to release before I can read it!