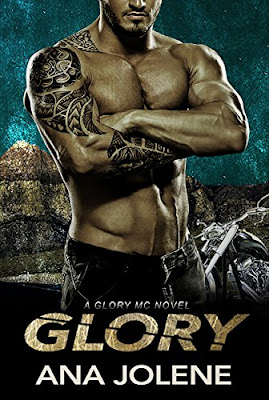 Nineteen year old, India Beaumont has bipolar II disorder. Living in a world where solar flares have reshaped society, she must fight to survive in Ward Four where the only people thriving are part of an exclusive motorcycle club. Glory MC don’t play well with strangers but when Indy manages to land a job as a bartender at their clubhouse, she gets the fresh start she’s always dreamed of. While everyone else is focused on the flares, no one will be paying attention to her or the disorder she means to keep from everyone.

The president’s son, Ian Haste, is the first to zero-in on her, seeming to sense the kindred spirit that she desperately hides. As secretary and treasurer of Glory MC, Hastie is exactly who Indy needs to avoid, but the reckless lifestyle he lives may also be the one thing that helps him understand her better than anyone else.

As tensions rise between Ward leaders, Indy’s secret threatens to be exposed before she is ready, and with only pieces of the puzzle, Hastie doesn’t know what to believe. When he finally discovers the secret she’s been hiding, will Hastie still be able to love her or will he deem Indy too crazy even for him?

Review:
Glory is the first book in Ana Jolene's Glory MC series, set in a dystopian future where solar flares have decimated the population and the government has collapsed. The area has been split into different sectors and Glory Motorcycle Club control ward 4. There is some rivalry between the different wards but we're yet to find out exactly what happened to cause this or who is in charge of most of the other areas. Indy and Hastie meet when she starts working behind the bar at the Glory MC club house, he's instantly attracted to her but she's holding him at a distance because of a secret she is desperately trying to keep. It's up to Hastie to break through her defences if he wants to understand what makes Indy tick.

This is Ana Jolene's debut novel and I think she did a brilliant job of bringing her characters to life. Indy in particular was a complex character whose bipolar disorder affects her greatly. She could be a hard character to understand because she goes from phases of hyper-mania straight into boughts of depression and you never know quite what she'll do next but I felt that was realistic for someone with her illness. I found it frustrating that she wouldn't tell Hastie what was going on with her but at the same time I could completely understand why she didn't want to be judged for her bipolar disorder and was afraid that he'd walk away from her if he knew about it. I liked the way Hastie was so patient with her and so understanding when he did find out why she was blowing hot and cold with him but sometimes I struggled to fit his personality in with what I expect from a scary alpha biker. This isn't a genre I've read a huge number of books in but in my experience MC characters tend to be a bit more badass than the Glory MC members but that's hopefully something that will change as we get to know them all a bit better.

Where the story fell down for me was in the world building, there were definitely some interesting ideas in there and I can see it getting better as the series continues but I felt we needed a bit more background information about how the world came to be destroyed. There were some inconsistencies in the way we're told that there is no government and no police so life is hard but at the same time they had easy access to electricity (when a solar flare wasn't in progress) so the utilities companies are still running. They were also easily able to buy gas for their bikes, Indy owned a car and lived alone with a female friend with no mention of any danger, there didn't seem to be any food shortages or general lawlessness in the area and they were able to contact manufacturers to place orders for supplies when Indy wanted to give the bar she worked in a makeover. Basically I don't understand why the government is gone but everything else still seems to be running as normal and that threw me out of the story a bit.

I'm hoping that the world will be expanded upon in the next book and I definitely liked the characters enough to want to continue reading. Considering this was her debut I expect great things from Ana Jolene in the future.