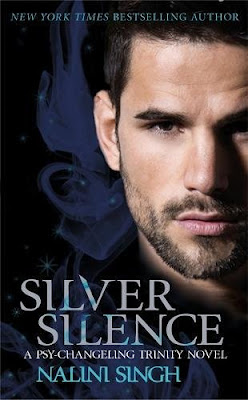 Control. Precision. Family. These are the principles that drive Silver Mercant. At a time when the fledgling Trinity Accord seeks to unite a divided world, with Silver playing a crucial role as director of a worldwide emergency response network, wildness and chaos are the last things she needs in her life. But that’s exactly what Valentin Nikolaev, alpha of the StoneWater Bears, brings with him.

Valentin has never met a more fascinating woman. Though Silver is ruled by Silence—her mind clear of all emotion—Valentin senses a whisper of fire around her. That’s what keeps him climbing apartment buildings to be near her. But when a shadow assassin almost succeeds in poisoning Silver, the stakes become deadly serious…and Silver finds herself in the heart of a powerful bear clan.

Her would-be assassin has no idea what their poison has unleashed...

Review:
Silver Silence is the first in the Psy-Changeling Trinity spin off series and Nalini Singh is about to take us in a whole new direction. I don't think I'd recommend starting here if you've not read the original series because you'd miss far too much but if you haven't discovered these books yet then I can't recommend Slave to Sensation highly enough. The first series gave us the fall of Silence and the beginnings of the Trinity Accord between the human, Psy and Changeling races but this series is going to focus more on finding a balance between the three groups and each of them learning to work together. Of course there are still those Psy who don't think Silence should have fallen and they aren't the only ones who are working against the Accord, humans have been used and abused by the Psy for far too long and it's going to be difficult to build any kind of trust between them and the Changelings have always remained fairly isolated in the past so all three races are in for a big learning experience if they're going to make Trinity a success.

Silver was Kaleb's trusted second in command so we've seen quite a lot of her throughout the original series but now she has taken control of the Em Net, the emergency network that is being built to allow all three races to pool their resources in the case of any kind of disaster situation. Em Net has coordinated relief efforts at natural disasters like earthquakes but also helps at any major disaster and Silver is in charge of making sure the right people are on hand for every situation. She works closely alongside the Arrow squad but also Changeling and human volunteers and they are slowly starting to gain the trust of the general population. Silver is fiercely efficient and on the surface she's completely Silent but she has a deep loyalty to her family and quite a loving relationship with her grandmother and brother. Because of her rare psychic abilities she knows it would be dangerous to her mental health to let her emotions run free but a certain teddy bear is very good at getting under her skin.

Valentin is alpha of the StoneWater bear clan and he knew Silver was the woman from him the moment he first met her. Of course Silver is currently living under Silence and she has no interest in a relationship with Valentin but bears are stubborn and he's got all the time in the world to convince her they are meant to be together. I loved the way Valentin decided to be "sneaky like a cat" and slowly woo his mate, he pushes Silver a little further every time they interact but he never goes too far or too fast because he respects her boundaries. They make such a ridiculously adorable couple and I was rooting for them from the very beginning. Valentin is an alpha with a heart of gold who absolutely adores his clan and will do anything for them and Silver may be Psy but she's equally strong willed and she will do whatever it takes to protect Valentin from the people who choose to spurn him.

I don't think we've had much interaction with the bears in the past so I was really excited to meet a whole new clan of shifters and I love how different the bears are to either the wolves or cats. Nalini Singh always does a brilliant job when it comes to creating interesting characters and she hits the nail on the head with this whole new clan, not just Valentin but also his older sisters and his various lieutenants. The group were just so much fun to hang around with and I loved the way the young members of the clan are the centre of everyone's world - the tiny ninjas completely stole my heart! Don't worry we still get glimpses of some of our old favourite characters but I liked that we've had a large influx of new faces. It can be very easy for a series to start to get stale or repetitive when you're 16 books in but this change of direction is definitely a great way to keep things fresh. I thought Nalini balanced things really well, enough new to keep it exciting but enough of what we're familiar with to still make it feel familiar and like you're catching up with old friends.

We got to see a lot of Bowen and the Human Alliance so I'm really hoping that means his book is coming soon but I'm really excited about spending more time with the bears as the series continues. Silver Silence was the perfect blend of sweet and sexy romance with action and intrigue from various groups who are determined to destroy the Trinity Accord before it can properly begin. I have very high hopes for season two of the Psy-Changeling world and as always Nalini's books remain at the top of my "buy it immediately" list.