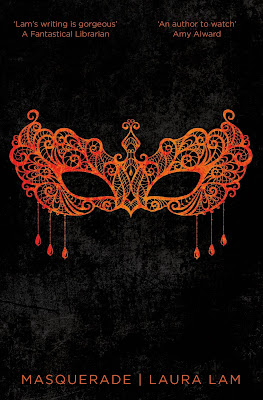 The gifted hide their talents, but dare they step into the light?

Micha's Chimaera powers are growing, until his dark visions overwhelm him. Drystan is forced to take him to Dr Pozzi, to save his life. But can they really trust the doctor, especially when a close friend is revealed to be a spy?

Meanwhile, violent unrest is sweeping the country, as anti-royalist factions fight to be heard. Then three Chimaera are attacked, after revealing their existence with the monarchy's blessing - and the struggle becomes personal. A small sect decimated the Chimaera in ancient times and nearly destroyed the world. Now they've re-emerged to spread terror once more. Micha will discover a royal secret, which draws him into the heart of the conflict. And he and his friends must risk everything to finally bring peace to their land.

Review:
I first fell in love with Micha and Drystan way back in 2013 when Pantomime was first released so I went into Masquerade with mixed feelings from the excitement that we were FINALLY going to get a conclusion to their story to the sadness that the journey was nearing an end. I still don't feel quite ready to say goodbye to this world or these characters but I do think this was a fitting end to the series and it did answer all of the biggest questions that had been raised in previous books. Some things possibly tied up a little too easily but overall I was happy with the way it ended and I'm very glad I invested the time to read the series.

Micha has been such a wonderful character from the very beginning, all of his struggles to become the person he was born to be and to find people who will accept him for who he is have paid off and now he has created a wonderful family for himself with Drystan, Cyan, Maske and more. I loved that his brother Cyril has supported him through everything and it was nice that Cyril had a larger role to play in this story too. Drystan has always been a character full of secrets and I was a bit disappointed we didn't get to dig further into his past but he's also been on quite a difficult journey and this book sees him facing his biggest temptations yet. I was worried for a time that he would fall completely apart but it was nice to see Micha support him in his hour of need when the tables turned.

I don't want to go into much detail about the plot but this story focuses much more on the political unrest in Ellada, the Foresters have been growing in power since the beginning, people are becoming more and more paranoid and tensions in the general population are high. For Micha and the other chimera the stakes have never been higher but you'll have to read the book for yourself if you want to know more than that. This book had less of the magical performances of the previous one but probably more intrigue and investigation, more secrets and bigger betrayals. The pace felt a little slower but not in a way that stopped me enjoying it, in fact I probably appreciated the urgency more because of the way events unfolded.

Masquerade was a fitting end to the trilogy but I'm still kind of hoping Laura Lam will decide to revisit this world in the future. I'd be very happy to spend more time with these characters or even explore other parts of the world and perhaps see some of the minor characters have a chance to shine.