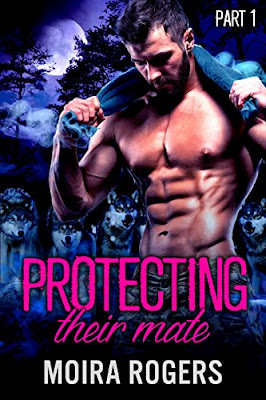 Part One (of Three)

Blake is on a mission from his alpha--to track down a werewolf whose parents dragged her into the human world years ago, one who may be in danger. He expects the lead to go nowhere, given how few wolves live among humans, but he discovers something rare indeed, caged in a basement: a beautiful, curvy woman gripped by the fever, ready to mate.

Ashley Todd has never fit in. She's always been too much--too big, too demanding, too aware of the wolf hiding beneath her skin. She's been locked away for months--been alone for a lifetime--and in walks Blake to save her from her prison. Her rescuer is hard, intense--a dominant wolf whose bossy attitude makes her growl...and yearn to submit.

Soothing Ashley's mating fever is Blake's responsibility--and his pleasure. Their passion is explosive, undeniable. But what started out as a job for Blake quickly becomes something more, and the toughest part of his mission looms: taking Ashley back to his pack so she can choose her permanent mate from amongst his brethren.

Ashley is drawn to dominant Blake, but meeting the rest of the pack reignites her desire. She is overwhelmed by her new life and all it entails, but embracing her inner wolf means embracing the truth: if she doesn't explore her attraction to the other members of the pack, she'll never find her forever mate.

Review:
Protecting Their Mate is a novel that was previously published as an eight part serial under the pen name Mia Thorne and is now being rereleased in just three parts under the name Moira Rogers. Just to be clear the story hasn't changed so if you read it in it's original format you don't need to buy this version. I've been a fan of the writing team behind the Moira Rogers for many years now but it's been a while since they had anything new under this name as they've been focused on their Kit Rocha stories for the last couple of years. If you've read any of their Beyond Series you'll know they excel at writing no-holds-barred but incredibly hot sex and thats exactly what you'll get from this serial. If you're looking for a hot quickie read then you definitely want to check this series out but if that's not your thing then it may be one to avoid.

Ashley is a werewolf but her parents chose to leave their pack when she was very young so she's been raised amongst humans. Her parents were determined to suppress their werewolf nature so Ashley has been taught to keep her wolf locked down tight but when she struggled to hide her mating urge her parents locked her in their basement hoping she would learn control. Instead it's just put her through months of torture as she struggles to deal with feelings that feel completely alien to her. Blake has been sent by his Alpha to track down Ashley, they know her parents chose to live as humans but have heard rumours that she's in danger and want to make sure she's okay. Blake is horrified by the conditions he finds her in, especially when he realises she's in heat, but he will do whatever it takes to give her the relief she needs and take her to safety.

I thought this was a great start to the serial, Blake and Ashley have wonderful chemistry and the authors waste no time getting down to the action so the heat ramps up very quickly! Female werewolves are in short supply and Blake's pack consists of five guys who are all looking to find a mate but they're more than willing to share in the meantime so I think Ashley is going to have a wonderful time while she decides which one of them is her best match. If you've read any of the Beyond series published under the name Kit Rocha then you'll have a very good idea of how hot this story will be (if you like this serial and haven't read the Beyond books - DO IT NOW!). I'm definitely looking forward to continuing the series and I can't wait to see which of the wolves Ashley ends up with!