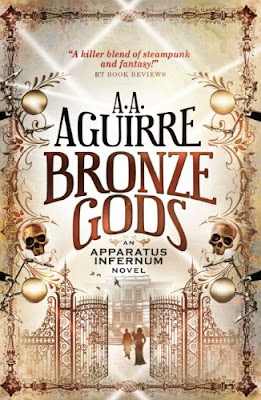 Across the water lay the land of Hy Breasil, inhabited by the immortal Ferishers. Though they were few, they were divided, and when the mortal conquerors came they did not stand together. They had magic but the invaders were many, and after a bitter war, peace was only made through marriage. And thus the ten great houses grew, and the city of Dorstaad rose, and the Ferisher bloodlines grew thin. But there were some who still wielded the ancient magic...

Janus Mikani and Celeste Ritsuko work all hours in the Criminal Investigation Division, keeping the citizens of Dorstaad safe. He’s a charming rogue with an uncanny sixth sense; she’s all logic—and the first female inspector. Between his instincts and her brains, they collar more criminals than any other partnership in the CID.

Then they’re assigned a potentially volatile case where one misstep could end their careers. At first, the search for the daughter of one of the great houses seems straightforward, but when the girl is found murdered—her body charred to cinders by an intricate and deadly device—Mikani and Ritsuko will be challenged as never before. A ruthless killer is stalking the gaslit streets, weaving blood and magic in a lethal ritual that could mean the end of everything they hold dear...

Review:
The Apparatus Infernum series is written by Ann Aguirre and her husband Andres under the pen name A.A. Aguirre. I'm a fan of Ann Aguirre's writing style and I love steampunk so of course I was drawn to this series and I'm so glad I found it. The authors have created an interesting world that is set in a different realm, one where originally ruled by the Ferishers (fae type immortals) but invaded by humans. The Ferishers were more powerful but the humans had numbers and technology on their side and now only a few main Ferisher families remain. The world has an industrial revolution feel to it but with the addition of magic and as the series centres around a pair of detectives it has a bit of a murder mystery thing going on too. It's a real mash up of genres that includes hints of a future romance and I'm very interested to see where it goes from here.

The main characters are CID Detectives Celeste Ritsuko and her partner Janus Mikani. Ritsuko is the first female detective employed by CID and therefore she has to work three times as hard as any of the men just to prove herself worthy of her position (sadly sexism is still a thing even in fictional worlds but that just makes it feel more realistic!), she is methodical and very, very motivated to prove she's the best so she's willing to put the legwork in to make sure she solves any cases that come her way. Mikani is obviously some ferisher blood somewhere in his family tree and it's given him the very useful ability to tell if people are lying to him, using his gift comes at a price but it makes him very handy to have around when they're interviewing suspects. Mikani is less organised than Ritsuko and tends to work by instinct rather than through logic but their very different styles really compliment each other and is what makes them one of CID's top teams of detectives.

After the disappearance of the daughter of one of the largest and most powerful Ferisher families Mikani and Ritsuko are handed their most important and high profile case yet. They need to find out what is going on fast, before public opinion can turn against them and they've got very little to go on. The deeper they dig the more mud they uncover and there is much more going on than either of them could have guessed at. I really enjoyed the mystery side to the story and was totally invested in the outcome of the story. I also loved both of the main characters and the strong friendship between them, there are definitely hints that their bond could become even deeper though so I'm keeping my fingers crossed for a bit of romance in the next book too.