I really enjoyed Philippa Gregory's Order of Darkness series so to celebrate the release of the new bind up edition that contains all three books I thought I'd share these videos I spotted on YouTube of Philippa Gregory talking about the four main characters Luca, Isolde, Freize and Ishraq. If you're a fan of historical fiction and you haven't discovered this series yet then you should definitely check it out! 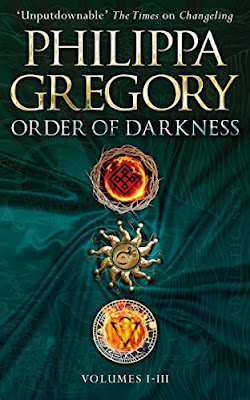 THE YEAR IS 1460 AND ALL SIGNS POINT TO IT BEING THE END OF THE WORLD.

Accused of heresy and expelled from his monastery, Luca Vero is recruited by a mysterious stranger to record the end of the days. His first mission takes him to a nunnery where the women are showing terrible signs of possession under an imprisoned Lady Abbess – Isolde.

Thrown together by danger, Luca and his true friend Freize, alongside Isolde and her companion Ishraq, embark on a daring journey across Europe, as they uncover the secrets of Order of Darkness, racing to stay ahead of the end of the world.

Dive deep into the world of medieval legends and disentangle reality from fear: read the first three books in the Order of Darkness series from the internationally renowned author of historical fiction Philippa Gregory.